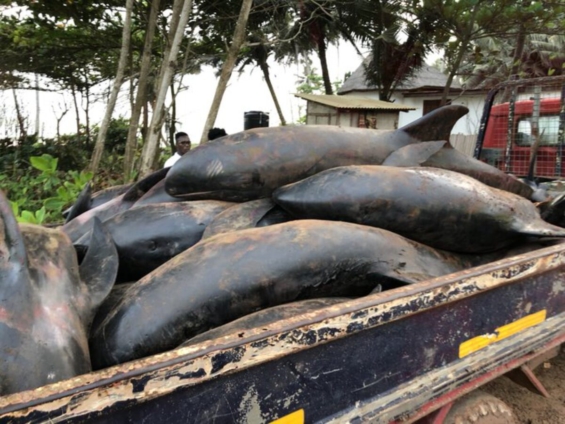 The Food and Drugs Authority (FDA) has cautioned Ghanaians against consuming the dead fish and dolphin that washed ashore yesterday, April 4.

This follows incidents in the country recently where scores of dead fish and dolphins, suspected to have been poisoned, washed ashore on beaches in the Greater Accra and Western Regions.

Following the citings yesterday, the Authority has dispatched its inspection teams to various fish markets around the country’s coasts where various species of fish washed ashore. These markets include the Osu Mandela market in the Korle-Klottey Municipal Assembly as well as other markets in the Western Region.

“The Food and Drugs Authority (FDA) in collaboration with other State agencies have been engaged in investigating and addressing the matter of various species of fishes washed ashore on some beaches since Friday, 2nd April, 2021. While laboratory investigations are ongoing, the Authority warns the general public to desist from consuming the fish washed ashore in view of the potential risk to health and safety,” the statement read.

According to the FDA, it is determined to prevent some washed-ashore fishes from entering the market.

Since April 2, residents in Keta, Osu and Axim-Bewire have sighted over 60 dead dolphins and other sea mammals along its coastline. Some of these dolphins were reported missing soon after they washed ashore.

As a response to this, the FDA, after receiving reports from its Western Regional Office intensified its public education and sensitization on the signs of contaminated fishes in the fishing communities and fish markets.

As a guide, the Authority has cautioned the general public to look out for “signs of popped out and unclear eyes, dull colouration of gills, bloating around the abdominal areas and/or possible oozing of foul scented fluids”.

Meanwhile, the FDA is entreating members of the general public to inform the Authority of persons who may be engaging in the buying and selling of these fishes.

“The public is hereby advised to report all suspected cases of possession or selling of these washed-ashore fishes to the FDA or local authorities. The consuming public is also cautioned to be wary of both fresh and recently smoked fish which are being sold at unusually low prices,” the statement concluded.