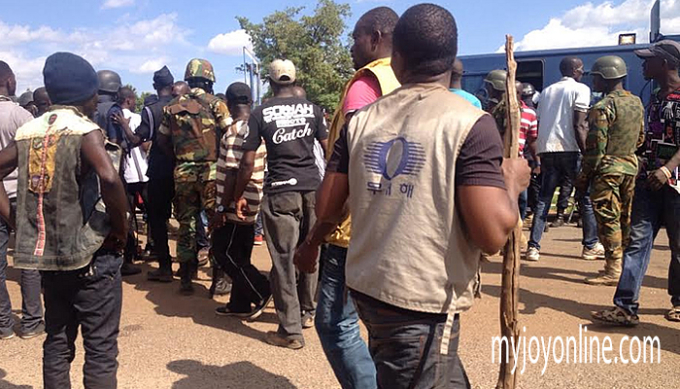 Fear has gripped communities in Talensi as counting of ballots begins in a by-election characterised by sporadic violence with reports of gun shots tear gas, machetes and sticks.

The seat at stake has been hyped as a dress rehearsal for 2016 general elections.

The two major political parties, the opposition New Patriotic Party (NPP) and ruling National Democratic Congress (NDC) have been trading strong accusations of instigating the violence that have attended the election.

NDC Deputy General Secretary Koku Anhyidoho says he was the first to witness the brunt of agitated supporters of the NPP who had mounted a road block in front of its constituency office.

He managed to drive through an escape route and found refuge with the police where he lodged a complaint.

Some of his men, he said sustained cutlass wounds inflicted on them by some disgruntled NPP supporters. But for the police escort he received, Anhyidohu suspects he would have been a victim of partisan violence.

The NPP have also expressed shock at the sight of gun-wielding Azoka Boys, a fanatic group linked to the NDC. Criss-crossing the constituency in 4-wheel drives, the thugs were said to have left dusty trails of their intent to intimidate and cause harm.

"It surprises me how they got the guns" Former NPP General Secretary Kwadwo Owusu Afriyie told Joy News Tuesday. He said despite rigorous searches by the police, some communities are awash with gun-wielding thugs.

Already one NPP official in Talensi constituency has been hospitalized at the Bolgatanga government hospital following gun shot wound he sustained on the thigh.

Mr Owusu Afriyie said the police stood unconcerned despite the violent posture of NDC supporters and Azoka Boys who had besieged the NPP constituency office.

The only time the police responded with tear gas was when the NPP supporters tried to fight back and match the violence of the NDC group, Kwadwo Owusu Afriyie indicated.

About 40,000 votes are at stake in the bye-election which is 18 months away from the general elections in December 2016.

The NPP will be eager to trump up a victory as a public verdict on an incompetent government while the ruling NDC want a victory as an endorsement of the President Mahama's leadership of a country in tough times.

The seat is a known stronghold of the NDC.