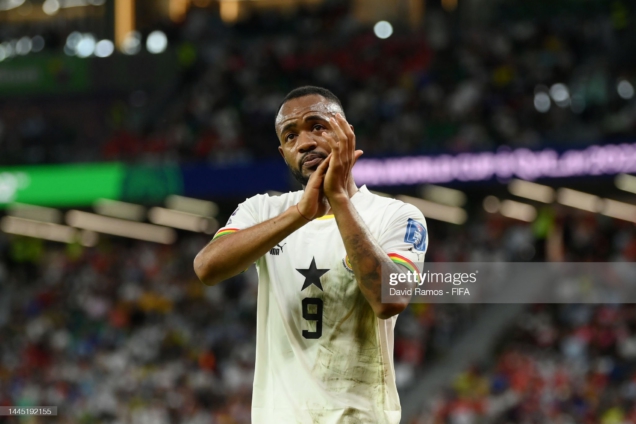 An inspired Jordan Ayew performance may not be something you get to see every day, but, hey, don’t feel compelled to adjust your reality at all.

Pinch yourself, if you must, but do no more: this really happened.

There have not been many games like this for the youngest of the Ayews, to be honest. The last was, I think, the mind-bending display in that 2-2 draw with Benin at AFCON 2019, when Jordan led the line with aplomb; before that, you’d have to go back some five years, to the friendly match that immediately preceded Ghana’s participation at the 2014 Fifa World Cup, against South Korea.

The popular opinion, across the 12 years of his senior Ghana career, is that Jordan – often accused of being lazy, selfish, or downright ineffectual – isn’t worthy of this shirt. That claim appears legitimised by the forward’s record of just 19 goals in 85 appearances, despite Jordan having had the most games for the Black Stars of all active internationals (behind his older brother, Andre, who’s already in triple figures).

The latest in the mounting pile of evidence for Jordan’s critics were two costly mistakes off the bench in Ghana’s first group game at the 2022 Fifa World Cup, against Portugal, which contributed to condemning the Black Stars to a 3-2 defeat; most, quite reasonably, didn’t want to see him out on the pitch again.

Imagine, then, how many must have grimaced and cursed and swore on seeing Jordan’s name among those who’d line up to face South Korea in the second group fixture on Monday.

But the Crystal Palace forward put up a performance to be remembered by, the highlights of which were deliveries into the box so good that even Kevin De Bruyne would behold in awe; on SuperSport punditry duty, former England international Owen Hargreaves compared Jordan’s input to what could be expected of still another master of the art, the legendary David Beckham.

As high praise comes, it gets no higher.

After an opening 15 minutes in which Ghana were reduced to a mooching, stumbling band of white-shirted spectators, the Black Stars finally broke from the shackles of the South Koreans, thanks in large part to Jordan’s artistry.

Dropping deep, tracking back and switching flanks – all stuff he does for Crystal Palace, his club, so well that it’s reportedly set to earn him another contract extension – Jordan grabbed the game, from his station on the left wing, and bent it to his will.

And it was with the first ball that he really bent into the South Korean area, from a foul he drew as a just reward by being so lively, that Jordan set into motion a sequence of touches that culminated in centre-back Mohammed Salisu giving Ghana the lead.

As he stood over the free-kick alongside Mohammed Kudus, Jordan, if the majority of his countrymen had their way, wouldn’t have been anywhere near that ball; he had after all, taken quite a few in the past to precious little effect.

Heck, even the dynamics appeared to favour Kudus whose left foot looked best-suited to an out-swinger.

Instead, the Ajax Amsterdam man merely made a dummy run, Jordan’s queue to follow it up promptly with a masterful cross, perfect in speed and in height. But the true quality of that ball lay in the position where Jordan placed it – right between the goalkeeper and the defensive line, the so-called corridor of uncertainty.

The ensuing confusion created a melee, and a failed attempt to clear the ball resulted in Salisu bundling home the rebound; crappy goal (much like the Southampton man’s first for Ghana less than a fortnight ago), yes, but Jordan’s superlative play still shone through that mess.

That, technically, didn’t count as an assist, but Jordan set that right just ten minutes later with another big contribution.

Receiving the ball from Gideon Mensah – the 30th pass in a brilliant build-up by the Black Stars – Jordan whipped it in an arc beyond the farthest South Korean defender, picking out the run of Kudus who only had to direct it with a glancing header. Ghana were 2-0 up, cruising to victory well before the first half was over, with Jordan pulling the strings.

This was the performance of a true Jordan; not Michael, the Chicago Bulls legend, no, but close enough in sheer magnitude and majesty, if in nothing else.

The detractors of Ghana’s No.9, from Adabraka to Bompata, had their mouths stuffed with humble pie – and Jordan even had a third serving coming.

Had Thomas Partey just angled his body ever so slightly in connecting with another teasing ball, in fact, Jordan would have got a third goal contribution to his name; the injustice here, with the Arsenal midfielder sending the ball just over, was that this was probably the pick of the six crosses Jordan had provided by the time he was replaced by the more eye-catching Kamaldeen Sulemana.

For the first time in years – maybe ever? – Ghanaians almost felt sad seeing Jordan substituted; only last March, in fact, he was booed and jeered all the way off the field in the first leg of Ghana’s Qatar 2022 play-off tie with Nigeria.

Kudus would score again, after South Korea levelled in the second half, to win the game, and was named ‘Man of the Match’. Instead of lapping up the glory, however, Kudus – known as much for his modesty as for his skill – shared the moment with his teammates by paying tribute to them, reserving special mention for the outstanding Jordan.

It was, truly, Jordan’s day, the day Ghanaians were reminded of just what he offers this team.

The fickle nature of football fans, especially in these parts, suggests the exhibition in selflessness and excellence Jordan gave would be filed under the ‘forgotten’ category the very next time he has a less-than-stellar game for Ghana. Even so, the memory of this showing – immense, impeccable and imperious – would linger quite a bit.

It’s probably something about the South Koreans that gets Jordan scouring through his locker for his rarely-seen A-game – recall the hat-trick from 2014? – and maybe he should be playing the East Asians a bit more regularly.

Or, maybe – just maybe – there are a few more strings to his bow than we’ve ever been willing to give him credit for, which is why, on occasions like these when he hits a bullseye, we’re left rubbing our eyes in disbelief.

Well, you do just that; and if you’re still not convinced any of this is real… feel free to pinch yourself, one more time.

DISCLAIMER: The Views, Comments, Opinions, Contributions and Statements made by Readers and Contributors on this platform do not necessarily represent the views or policy of Multimedia Group Limited.
Tags:
2022 FIFA World Cup
Black Stars
Jordan Ayew
Mohammed Kudus