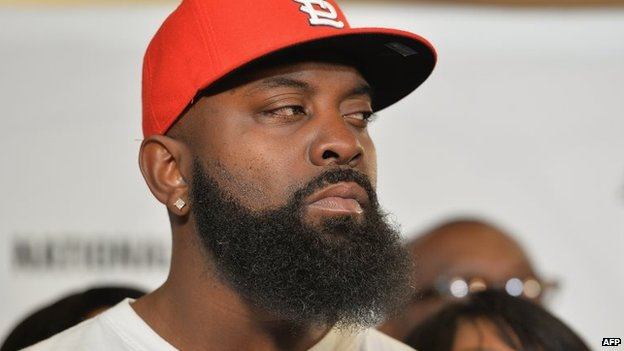 The family of Michael Brown, the black teenager shot dead by a policeman, say they are "crushed" by the grand jury's decision not to charge Darren Wilson.

Mr Wilson, who shot dead Mr Brown in Ferguson, Missouri, in August, has told US media he has a "clean conscience".

There were protests over the ruling in 13 US cities on Tuesday night.

In Ferguson, there was some unrest on as protesters scuffled with police, and a police car outside the town hall was set alight.

However, police said security was "much better" than Monday, when there was widespread rioting and looting, and more than a dozen buildings were set alight.

About 2,000 National Guard troops were deployed in the city on Tuesday night. Forty-four people were arrested. 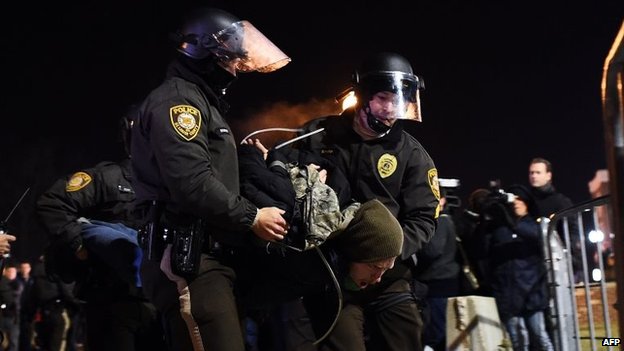 St Louis police said Tuesday was a "much better night" than Monday, despite some scuffles

Those demonstrations were mostly peaceful, but rioting broke out in Oakland, California, where protesters started a street fire.

Speaking out after the verdict on Monday, Mr Wilson told US broadcaster ABC that he had a "clean conscience".

He said that before the shooting, Mr Brown had pushed him back into his car, hit him and grabbed at his drawn gun, and said that he felt "like a five-year-old holding on to [US wrestler] Hulk Hogan".

On Wednesday, Mr Brown's parents said that they did not believe Mr Wilson's account of events. 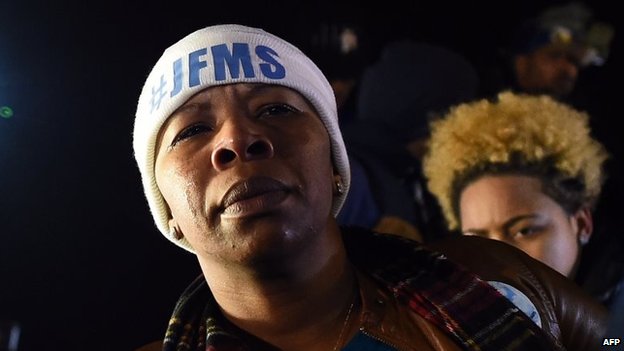 Mr Brown's mother, Lesley McSpadden, said her son did not have a history of violence

In a separate interview with CBS, she added: "I don't believe a word of it. I know my son far too well… Our son doesn't have a history of violence."

He said that "terrible" things had been said about his son, and prosecutors had "crucified his character".

He also urged protesters to avoid violence, saying: "My son was a good guy, a quiet guy. So in his name, I want to keep it on a positive note."

Mr Brown's supporters said he was attempting to surrender to Mr Wilson when he was shot. 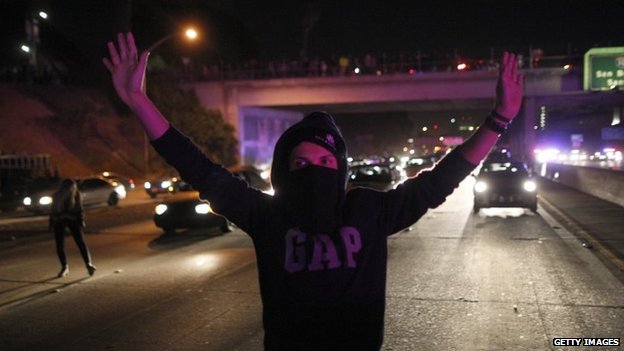 In Los Angeles, protesters set up barricades and shut down a freeway 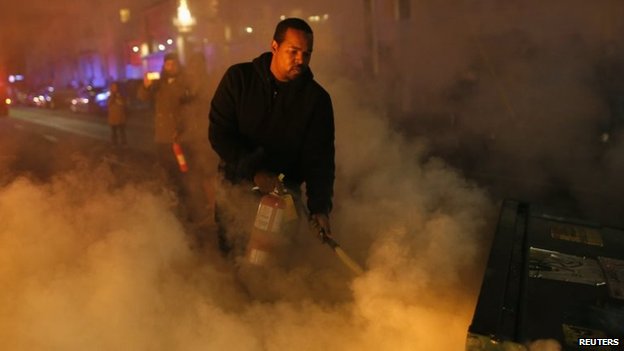 In Oakland, residents sought to extinguish a street fire started by protesters

However, the state prosecutor said physical evidence had contradicted some of the witness statements.

Many in Ferguson's predominantly African-American community had called for Mr Wilson to be charged with murder, but the grand jury – of nine white and three black members – decided not to charge him.

The decision means Mr Wilson will not face state criminal charges over the shooting. However, the US Justice Department has also launched a federal investigation into whether Mr Wilson violated Mr Brown's civil rights.

Speaking from Chicago on Tuesday, President Barack Obama said there was "no excuse" for destructive behaviour and criminal acts of rioting.

However, he added that "many communities of colour" had a sense that laws were not being enforced "uniformly or fairly", and said he had ordered Attorney General Eric Holder to look at what steps could be taken to build trust.