From Eric’s Diary: Of fuel-less ambulances and fuel-full V8s 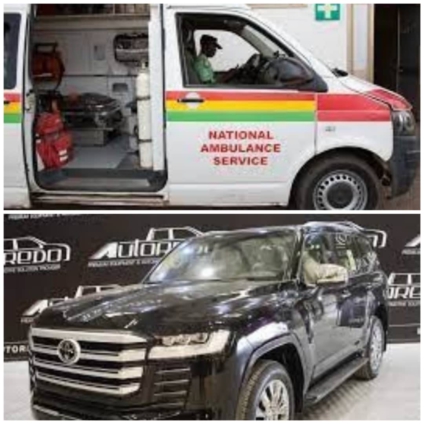 I am still in the singing mode from my previous epistle.

I am told some of the NPP delegates went to Mr. John Boadu when news filtered through that he had lost the election to sing Kizz Daniel and Tekno’s song, Buga, for him. It is said that when they got there, he was asleep so -“Wake up, wake up, don’t sleep, collect your money🎼🎼🎼,” they yelled.

Since then, some happenings in our country brought Stoneboy’s Run Go song on my radar. Hear the part that serves the purpose of this article:

This is the line that actually reflects my mood- “When dem say we have to pay for the oxygen we breathe”.

Hmm! Human beings, we really owe God tons of gratitude. Yes, for making oxygen flow freely without the ability of any human to regulate it.

But hold your breath. Long before Stonebwoy wrote the above, the Reggae legend, Robert Nestor Marley sang this- “So much trouble in this world🎼🎼🎼.” Please sing along.

You see men sailing on their ego trip
Blast off on their spaceship
Million miles from reality
No care for you, no care for me🎼🎼🎼. ”

In Marley’s song, “Blast off on their spaceship Million miles from reality, No care for you, no care for me” is what concerns me.

Sometimes I wonder. No. Now I know, that our leaders don’t care about us. Remember Bob Marley was making reference to goings on in a developing country like ours-Jamaica.

More so when His Excellency Nana Addo Dankwa Akufo-Addo before becoming President, knew what to do- “y3te sika so nsu ekom di yen” – ‘We are rich yet poor’ he diagnosed. Why he has not been able to use our rich resources to eradicate our poverty? Your guess is as good as mine.

The late Prof. J.E.A. Mills is on record to have said “we have a country where only the privileged few are enjoying, while the generality of the people are wallowing in poverty, this must come to an end.”

“Africa ekpe s33 ts)”- ‘Africa’s development has stagnated for far too long’ is a statement the late President J.J. Rawlings made at a political rally in 1996.

Suffice it to say that they have all come and gone. But we are where we are.

What I know about the National Ambulance Service

The over a decade relationship I had with the health sector is public knowledge. During this period, I was fortunate to have been part of the initial discussions that led to the establishment of the National Ambulance Service (NAS).

As the Public Relations Officer of the Nursing and Midwifery Council of Ghana at the time of conception of the idea and subsequent roll out, my boss asked me to represent her at some of the meetings that deliberated on the birth of the NAS.

At one of such meetings, the agenda was how to make the services of the NAS, when it becomes operational, known to the public. In my bid to make myself relevant at the mostly health professionals-attended meeting, I desperately sought and finally caught the eye of the chairman of the meeting. After all, it is my forte- channels of mass communication.

Having been given the floor, I cleared my throat and marshalled all my vocabulary in a tone of the English language that I was sure would impress my target audience, not just with the message, but with the delivery as well.

I suggested that the NAS could strike a deal with the Graphic Communication Group and the New Times Corporation to advertise the toll-free emergency number – 112 on their front pages, for free. Being a state institution, I posited that the two media organisations would gladly offer the needed support to the NAS.

Guess what! While most of the secondary and tertiary audiences of my message clapped loudly for my input, my primary target, Prof. Ahmed Nuhu Zachariah looked at me coolly.

After the applause died down, he raised his hand, with the forefinger at the fore. When the chairman signaled him to proceed, he, in the characteristic public servant diplomatic fashion, said, “thank you very much for the brilliant suggestion. But my reaction will be that since we are just about to start, we cannot do that because if we advertise and the people call for our services in their numbers and we can’t meet it, what happens?”

My applause-filled swollen head literary deflated. This was soon replaced with shock. ‘But how can he say that? Then why are we here? This man paa?’ Were follow up questions I posed to myself.

Later, during coffee break, he intimated to me the rationale for his poco a poco approach- in order not to be overwhelmed given the prevailing circumstances at the time. I hope he remembers though.

Close to two decades later, I guess Prof. Zackariah has still not thought it wise to advertise the hotline per my prescription due to reasons that are now obvious.

Prof Ahmed Nuhu Zakariah is a Cuba-trained Specialist in Intensive Care Medicine, Cardiac, Thoracic and Vascular Anaesthesia. He is a seasoned instructor in both Basic Life Support and Advanced Cardiac Life Support of international repute.

Earlier in July, I heard his uniquely soft voice for a man on Joy FM’s Super Morning Show (SMS).

I paid attention and realized that he was addressing an ad-hoc committee constituted by Parliament to investigate circumstances that led to the death of a 30 year old nursing mother. Ms. Augustina Awortwe died whilst in transit purportedly due to the delay on the part of officers of NAS.

I heard Prof. Zakariah confirming to the Committee that his officers (Emergency Medical Technicians) demanded GH₵600 from the husband of the deceased before agreeing to transport the patient. Actually he justified the charge of GH₵600 as standard practice.

He noted that although their services are supposed to be free, resource constraints have led them to fuel the ambulances mainly for road traffic accidents. However, when it comes to inter-hospital transfers, an amount is requested as “fuel support”.

Read him, “A communication went to the hospital that they didn’t have enough fuel, therefore they will need GH₵600 support of fuel.

“According to the crew, they were assured that they could move because the hospital was going to arrange either directly or indirectly with the family of the patient to get the fuel support. So the impression was that the husband of the patient was going to provide that support. So they left the hospital with the understanding that they would pick the husband who was going to provide the fuel support. They arrived at the point of picking up the patient’s husband and they discovered that he didn’t have the money for fuel.”

My dear reader, a cousin of mine said the other day that, “in Ghana, if you are sick and you don’t have money, you will die.” That is the truth. Otherwise, ambulance that will take you to the hospital to be saved too has now become cash and carry? Then why don’t I use a taxi or Bolt?

The host of the SMS could not believe his ears when he heard Prof Zakariah, just like I said ‘this man paa?’ to myself. But do you blame Prof? I don’t, because as a head of agency, there is a limit to what he can do besides preparing NAS’s annual budget and defending it. Provision of funds to run the Service, as is done elsewhere, is far beyond him.

Thankfully, as alluded to above, God’s got our back. So the general oxygen, the one that flows abundantly, they cannot charge for.

What I am certain will persist is what Bob Marley complained about. I hold this view because day in and out, we see the President and his ministers “Blast off on their spaceship”- Chartered flights, Mercedes benz, Toyota land cruiser V8s.

While on these expensive trips and fuel-guzzling vehicles, they clearly seem “Million miles from reality. No care for you, no care for me.”

During the SMS edition under reference supra, Kojo Yankson referred to a phenomenon whereby at state functions, the engines of the V8s that the President and Ministers use are left running for the duration of the event. According to him, he once enquired about the rationale for the practice and he was told that it was for security reasons- to ensure that if there is danger, the car is ready to drive off without any let or hindrance.

So you see? Our leaders have free fuel that they can waste in anticipation of danger, but we the people of Ghana have to pay to fuel an ambulance in order to stay alive when we find ourselves in a state of emergency.

I have observed this practice a few times at some media houses where government officials have been hosted on their programmes. The drivers sit behind the steering wheel enjoying the air-condition in the stationary vehicle.

Besides, why on earth should as many as ten or more V8s each follow the President and Vice President to the same function? I guess the same reason of security will be adduced.

My take is that it is because the cars and fuel come at no cost to them personally.

When I read George Orwell’s book- Animal Farm in Journalism School, I wondered why the lecturer, Mr. Afriyie, alias ‘CC Fries’ would bother us, in a tertiary institution, with a story book on animals and how they live on a farm.

It was when I started practicing journalism that I realised how real the Animal Farm story is. Four legs good, two legs bad. Some are definitely more equal than others.

The pelting of sachet water at Hon. Osei Kyei-Mensah-Bonsu over poor state of roads in Suame the other day, condemnable as it is, should be a wakeup call for our leaders that gradually, the led are becoming fed up with the fact that they enjoy, while we endure, life.

Fuel-less ambulances and fuel-ful V8s no doubt. Ghana! We can only hope for a better day, some day.

PS: Finally, President Akufo-Addo has sacked Madam Adwoa Safo. A mark of good leadership. But did we have to wait for this long? That’s your call.

Let God lead. Follow Him directly, not through any human.

The writer works at Myjoyonline.com. He is also an author of two books whose contents share knowledge on how anyone desirous of writing like him can do so. Eric can be reached via email eric.mensah-ayettey@myjoyonline.com