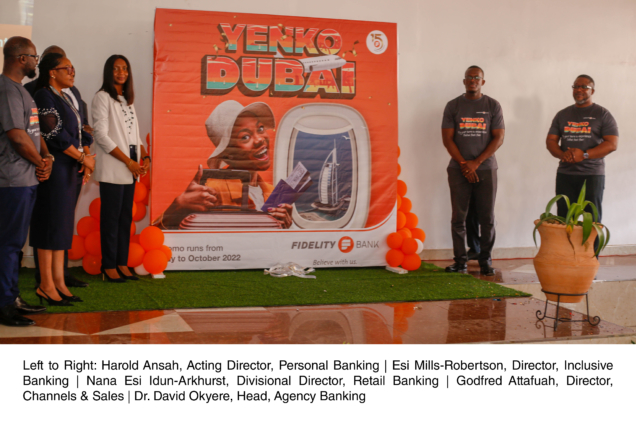 The promo which seeks to reward the Bank’s most outstanding agents with an all-expense paid vacation to Dubai forms part of activities being rolled out to mark Fidelity’s 15th year anniversary celebrations.

It comes on the back of the Bank’s pioneering role in initiating the agency banking model in Ghana, thereby bringing its services to the doorsteps of consumers across the country through the Bank’s wide-reaching agent network.

Agent points are positioned at popular community locations such as fuel stations, post offices, market centres, supermarkets and the like, to give customers convenient access to the Bank’s offerings.

Speaking at the launch of the promo during the Bank’s periodic agent engagement forum in Kumasi, the Divisional Director for Retail Banking at Fidelity Bank, Nana Esi Idun-Arkhurst, reiterated that Fidelity Bank is very proud and appreciative of the significant strides its agents have made in broadening access to the Bank’s services thereby fostering financial inclusion and contributing to the overall growth of the bank.

She further stated, “Our Fidelity Agents are an integral part of the Fidelity success story, thus as we celebrate our 15th anniversary, it is important that we seize the opportunity to reward them for their dedication, loyalty and hard work.”

She added that “in addition to the promo, the bank will very soon launch the Agent locator which will make it easier for customers to identify and locate Agent shops from their mobile devices.

Nana Esi also threw more light on the modalities of the Promo. She indicated that aside the trip to Dubai, which is the ultimate prize, there are other mouthwatering rewards, therefore, this is the best time for anyone to become a Fidelity Bank Agent as new entrants within this period are also eligible to compete in the Promo.

“Besides the Dubai experience, a staycation in Royal Senchi, Maaha Beach Resort, brand new mobile phones and lunch with top Fidelity executives are also up for grabs,” She added.

Outlining the mechanics for the promotion and the related rewards, Dr David Okyere, Head of Agency Banking indicated that to qualify an agent must endeavour to open and fund Fidelity Smart accounts, make more customer deposits, funds transfers, withdrawals, interbank transfers and other transactions from now up to November 2022.

The agents with the highest number of transactions stand a better chance of winning any of the prizes on offer. Dr Okyere further indicated that Agents must achieve a cumulative KPI score of 80% to be eligible for the promotion.

He again highlighted that Agents who, amongst other things, undertake fraudulent transactions or are found to have been involved in previous activities outside the permissible activities of an agent would be disqualified.

Fidelity Bank was the first to launch Agency Banking in Ghana in 2013 as part of the Bank’s financial inclusion agenda.

After a successful pilot in July 2013 with 24 Agents, Fidelity Bank received approval from the Bank of Ghana to fully execute its Agency Banking model in early 2014.

Today, Fidelity Bank has about 5000 Agents operating across all the regions of Ghana. Customers and non-customers thus have access to some banking transactions such as deposits, withdrawals, transfers, bill payments, interbank transfers, and mobile top-ups through the agents without having to visit a banking hall.

Fidelity Agency Banking’s exceptional track record contributed to its recognition as the Best Bank in Agency Banking at the 6th Instinct Business Finance Innovation Awards in 2021.