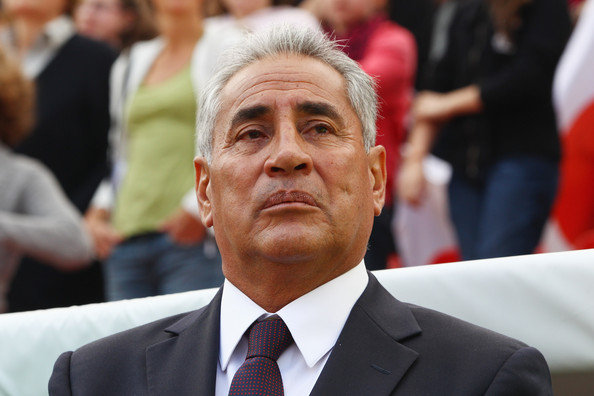 Mexico’s national women’s teams are very much a family concern, with Leonardo Cuellar currently in charge of the country’s senior side and his son Christopher overseeing the U-20s’ ultimately fruitless campaign at the FIFA U-20 Women’s World Cup Canada 2014.

The two have spent the last few days together in Canada, and though El Tri’s involvement in the tournament is now at an end, FIFA.com had the chance to speak to them and get the inside view on the development of the women’s game in Mexico and the advantages and disadvantages of working with a family member.

“He’s the boss,” said Christopher, pointing at his father, who has stuck gamely to his task since the Mexican Football Association gave him the brief of developing the country’s women players in the late 1990s.
“There are a lot of people working on this, but no one’s shown more enthusiasm than him in trying to develop and improve our game,” added Cuellar Jr.

That passion and commitment can have its drawbacks, however, as he went on to explain: “My father is pretty obsessive about his work. Sometimes I’ll be at home, trying to switch off from work, and he’ll ring me and say: ‘Listen, how about if we try this or that in training tomorrow?’. We’ll even be at the beach and he’s thinking about football.”
Shrugging his shoulders, Leonardo retorted: “But football is my life!”
Running the show

Though Leonardo is the man in charge of the overall project, it is Christopher who has been calling the shots in Canada. “He’s the one in charge here,” said the head of the Cuellar family. “I came as an assistant only, and he’s totally free to make the decisions he wants and to take his project forward.”

“He doesn’t stick his nose in,” replied Christopher when asked if the old man chips in with ideas, only for a laughing Leonardo to butt in and admit the opposite.

“Well, I think I bother him more when I’m helping him out with the seniors,” acknowledged Christopher. “The good thing is that we have a relationship in which he knows that I’m not going to say ‘yes’ to everything and vice versa. We’ve been working together for many years.”

The father and son act began in 2005, after injury had brought an end to Christopher’s footballing career in his early 20s. Taking up a position with a Los Angeles law firm, he kept in touch with the game by coaching boys’ teams.

“In Mexico it’s not easy to find people with an interest in women’s football and I needed people for my project,” said Leonardo, taking up the story. “I was very impressed by his ability to analyse things so I invited him to come and join me.”

“I started out as a volunteer. I had to show my worth and fight hard, and I’ve worked my way up from the bottom,” said Christopher, aware that some people might see his inclusion in the national set-up as a classic case of nepotism.

The proud Leonardo is in no doubt he picked the right man: “Chris is a fundamental part of the project, so much so that whenever I’ve had offers to coach men’s teams, the FA have always said I can go as long as he stays.”
Nevertheless, there seems little danger of either departing their posts, such is their obvious passion for their work.
Striving for more

“We’re always trying to reinvent ourselves,” said the older of the Cuellars, explaining their approach. “We’re right next door to the USA, one of the superpowers of women’s football, and we have to keep an eye on what they’re doing because we compete against them in World Cup qualifiers.”

It is here that Christopher has a crucial role to play with his analytical eye: “He spends the whole day making videos, and they’re great for showing to the players later on.”

The creation of a national U-15 side, which is about to make its debut at the Youth Olympic Women’s Football Tournament in Nanjing, is the Cuellar’s latest achievement, the latest phase in their overall plan to bolster the senior team.

“There are only two players in the current senior side who haven’t come up through the youth teams,” said Leonardo, whose U-20 side contains a number of players who have already made full international debuts, among them the goalkeeper Cecilia Santiago.
Now 60, Leonardo no longer sports the afro hairstyle that made him famous during his playing days back in the 1970s and 80s. “It doesn’t grow like that any more,” said his son, unable to conceal a laugh.

“When you’ve had hair like that, you can’t really tell the players off for trying out an outlandish look themselves,” said Cuellar Sr, showing that his love of life and sense of humour are still intact.

Before we take our leave, we ask Christopher to put a question to his father: “Can I have some time off when the tournament is over? And don’t forget this is being recorded.”

Granting his son’s request, the 'boss', who became a proud grandfather a few months ago, said: “I’m going to give him a few days so he can look after my granddaughter properly.”

With Mexico out of Canada 2014 already, Christopher should be taking his well-earned break in just a few days’ time, no doubt keeping an ear out just in case the telephone rings.