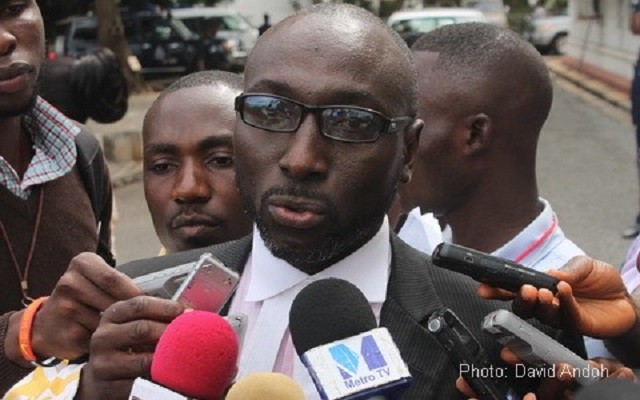 Lawyer for the Assin North Member of Parliament-elect, Abraham Amaliba says he suspects foul play in his inability to file an appeal following the injunction order granted by the Cape Coast High court against.

In an interview on JoyNews’ The Pulse Wednesday, Mr Amaliba noted that even before the judge announced the ruling, James Gyakye Quayson’s legal team had initiated processes to apply for a stay of execution but the filling clerk had left post for Saltpond.

This, according to him, was a deliberate attempt by the court’s Registry to frustrate the legal counsel of the NDC MP-elect and prevent him from being inaugurated into the eighth parliament.

“We wanted to file an appeal but they locked us out. We were not served. The clerk’s office was locked up. They deliberately locked us out so that we do not file an appeal. Because if the judge has been called off his holiday to a sitting why would a filing clerk leave his or her post and lock up?

“But whilst we were there, trying to go through with the processes, the registrar and the judge had drawn up the injunction order and electronically sent it to Accra and left the premises,” he claimed.

The court has ruled that James Gyakye Quayson cannot hold himself as the MP-elect for the constituency.

This follows a petition filed by one Michael Ankomah that the MP-elect still held on to his Canadian citizenship when he was filing to contest in the December polls.

In the defense of his client, Mr Amaliba stressed that Mr Quayson had initiated the process of renunciation of his Canadian citizenship in 2019, but due to the Covid-19 pandemic issuing the certificate delayed.

He insisted that since the certificate was however due before the 2020 general election, it

Meanwhile, Minority Leader, Haruna Iddrisu in his final address before the dissolution of the seventh Parliament called for the laws to be applicable equally to all persons devoid of one’s political affiliation.

“I look forward to a Ghana which does not have different set of laws for NDC and NPP. But the Rule of Law in all its facets including Equality before the law is respected at all times.

DISCLAIMER: The Views, Comments, Opinions, Contributions and Statements made by Readers and Contributors on this platform do not necessarily represent the views or policy of Multimedia Group Limited.
Tags:
Abraham Amaliba
Assin North MP-elect
court