Three of Ghana’s most decorated Senior High Schools are set for the much-awaited final battle for the 2019 National Science and Maths Quiz (NSMQ) trophy later today.

After months of preparation, weeks of nail-biting contests and renewal of academic rivalries, it all comes down to the big event on Thursday, July 11, 2019, at the National Theatre in Accra.

Will it be a sixth title win for the Presbyterian Boys Secondary School (PRESEC – Legon)? Will the defending champions, St. Peters (Persco), hold on to the trophy? Or perhaps it will be a story of the coveted trophy returning to St Augustine’s College (Augusco) after a 12-year drought.

All the three schools displayed a variety of skill and formidability in their journey to the final.

Only St Augustine’s came from the qualifiers to reach this stage. PRESEC-Legon and St Peter’s were seeded from the 2018 competition because they reached the quarterfinal. 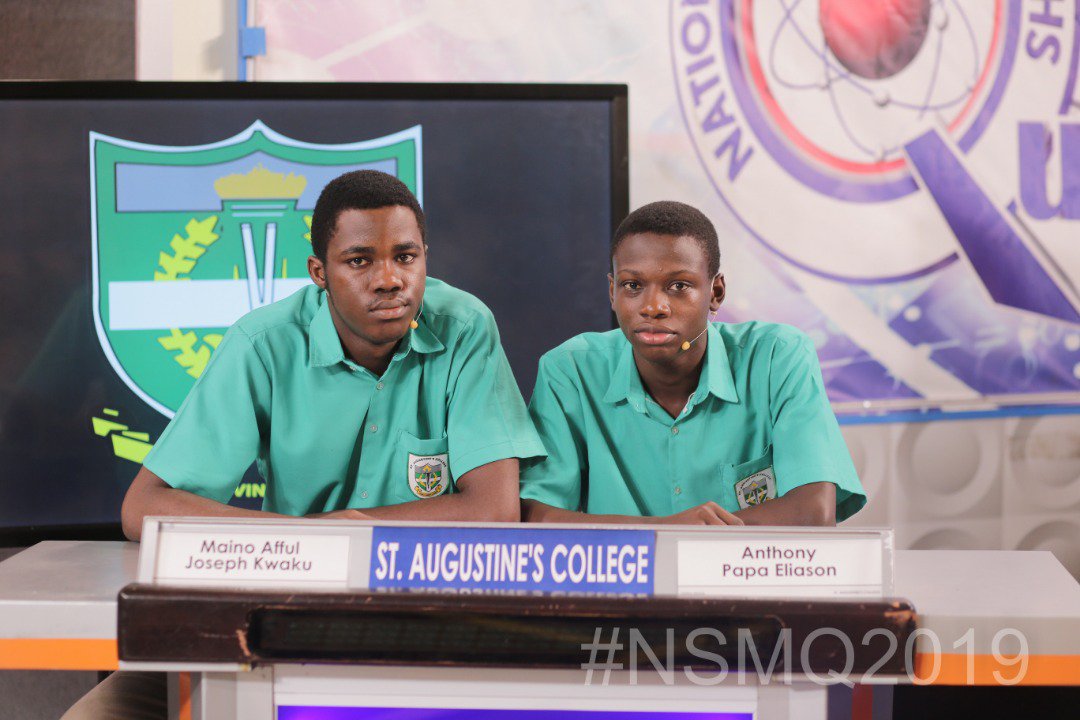 But that won’t count in the grand finale; all that counts is who wants it most. The clash is one of the top dogs as all schools have won the ultimate before. 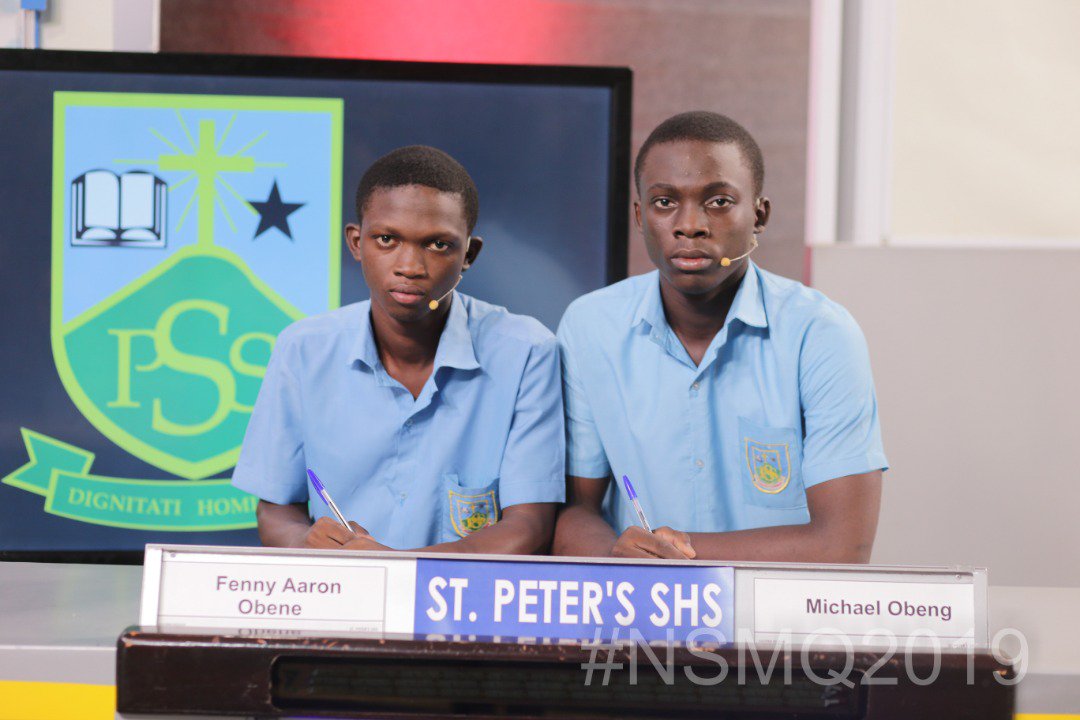 St Peter’s will be determined to do a back to back and PRESEC-Legon have already declared that they want to win the title for a record sixth time.

PRESEC-Legon and St Peter’s qualified to the final with 48 points and St Augustine’s qualified with 53 points. 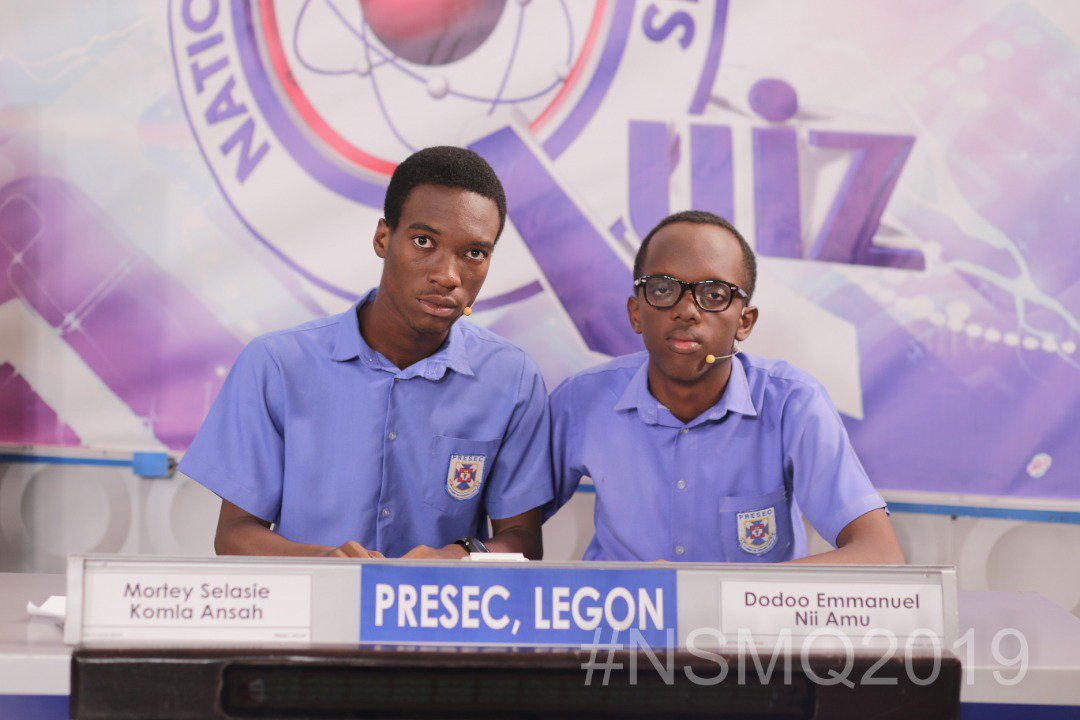 One name that will stick after the quiz is Newton.

Newton Jimmy Stephen is a contestant for finalists St Augustine’s College. The final year student does not start the contests; he comes on for the last two rounds; Round Four, the True or False segment and Round Five, the Riddles.

Mensah Yaw Nathaniel of Presec Legon, also finalists, comes on for his school at the same stage.

Photo: Nathaniel and Newton; contestants in the NSMQ2019.

The two have become popular among fans of the Primetime show for their accuracy when they come on board.

Speaking to Kojo Yankson on the AM Show on JoyNews, Newton and Nathaniel explained why they come on as substitutes and their importance to the schools’ victory.

Inside story: How Presec, St. Augustine, St Peters got to NSMQ finals

The nine finalists of the competition on Wednesday gave a sneak-peak of their preparations ahead of the finals today.

While their quick, intelligent and eloquent responses thrilled the millions who watch them week after week, little is known of the preparations which birthed that.

The contestants from Presec, St. Augustine’s College and St Peter’s perform so well on stage it almost seems they are keeping to a well-rehearsed script directed by Primetime, organizers of the quiz just to generate public excitement.

Questions from Kojo Yankson on the AM show on JoyNews brought the geniuses closer to viewers and listeners of Joy FM.

During the interview, it was apparent, even to the disinterested observer, that these contestants were made of steel and baked in the hottest fiery furnace.

They approached questions bordering on any sphere of life with the same dexterity and brilliance with which they answer the complex science and maths questions during the Quiz.

“I don’t hear the cheers when I am focused for the quiz,” was the response of a Presbyterian Boys contestant who was asked if the loud cheers from their supporters affect their performance in any way.

What preparations went into the contest?

The role of old students from the various schools kept coming up.

Alumni of these great give more than just deafening cheers. In unison, all three schools admitted that they have come thus far because of the support of their old boys.

Among other things, contestants from the Presbyterian Boys Secondary School said it is the incentives and direct support of their old students which keeps urging them on.

St. Augustine’s, for example, admit to having a special department dedicated to preparing students for the competition and this has been made possible by the benevolence of their old students’ association.

With such infrastructure, the school undertakes as many mock contests as possible including those with external schools.

These prior preparations help them overcome the pressure and stage fright which usual is typical of highly anticipated national contests.

The role of parents and family members came up, too.

For instance, famous Presec contestant, Dodoo Emmanuel Nii Amu said his sister is his psychologist, who has helped him to give his best at the contest without breaking down or burning out.

Kojo Yankson wondered how the contestants are able to answer varied questions from a broad field like science and maths. They said “we specialize. “

Specific areas are assigned to contestants such that depending on the areas a question comes from, a particular candidate elects to answer.

It is for this reason that some employ the substitution method where a candidate replaces another depending on the area of science the contest is focusing on.

These ensure that the pressure in the contest is evenly distributed.

On their anticipation ahead of the grand finale tomorrow, they said they were not apprehensive.

“Once you qualify to the finals only God has the final say. There are no big schools,” contestant asserted.

Pointing to their future aspirations, it was evenly distributed between the fields of medicine, petrochemical engineering, Computer Science and entrepreneurship.