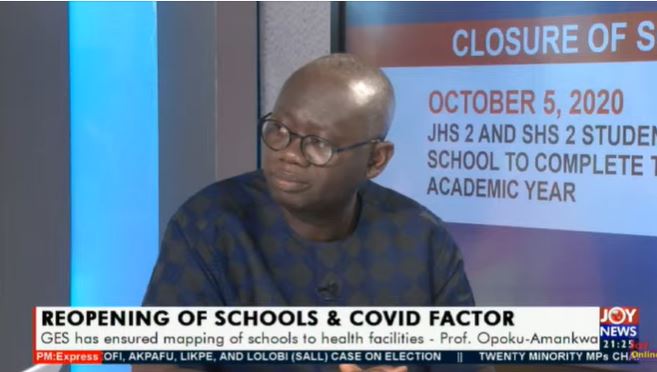 Director-General of the Ghana Education Service, Prof. Kwasi Opoku-Amankwa, has reassured the Buffer Stock Company that the Finance Ministry is putting measures in place to clear any debt owed them.

Senior high schools in the country have experienced food crisis recently due to the delay in food supplies by the Buffer Stock Company.

The delay in the supply of food items has mainly been a result of the government’s indebtedness to the food supply entity.

Prof. Opoku-Amankwa in an interview on Upfront, Thursday, said President Akufo-Addo has directed that the debt be cleared.

“I did not listen fully to the Minister’s presentation yesterday at Parliament but I believe he might have informed them that the President has asked that within a given period those debts should be cleared and we are very sure that the Ministry of Finance is working to clear those debts,” he said.

He, however, admitted that government may not be able to pay all the debt owed instantly but rather make payments in installments.

“Let me also indicate that as far as those debts are concerned, as far as government is concerned in most cases government may not be able to pay debt outright, but what we do is that they pay to catch up. The most important thing is that the suppliers will see that at least they are paid in installment and we are consistent in the payment in installment,” he added.

The Education Minister, Dr. Yaw Osei Adutwum while addressing Parliament on Wednesday said the food crisis in the senior high schools across the country is due to government owing the Buffer Stock Company an amount of GH₵340million.

According to Dr Adutwum, despite government’s indebtedness to the Buffer Stock Company to that tune, it is working to pay in order to resolve the food crisis.

“Mr. Speaker, the outstanding payment obligation of the Ministry of Education to the National Food Buffer Stock Company as of 20th July is GHC340, 296,866. 08 pesewas. Government is working towards payment of this outstanding obligation,” he said.

He stated that the government has already released and paid the Buffer Stock Company an amount of GHC327,871, 809.10 pesewas this year.

DISCLAIMER: The Views, Comments, Opinions, Contributions and Statements made by Readers and Contributors on this platform do not necessarily represent the views or policy of Multimedia Group Limited.
Tags:
Buffer Stock Company
Food shortage
GES Director-General
Prof. Kwasi Opoku-Amankaw