Europe’s largest migrant camp, Moria, has been “completely destroyed” after massive fires broke out early Wednesday at the overcrowded site on Greece’s Lesbos island, according to an eyewitness.

Firefighters are trying to contain the fire at the refugee camp, home to an estimated 13,000 people, more than six times its maximum capacity of 2,200 people.

More than 4,000 children, including 407 unaccompanied minors, live in the camp, according to the United Nations Refugee Agency. 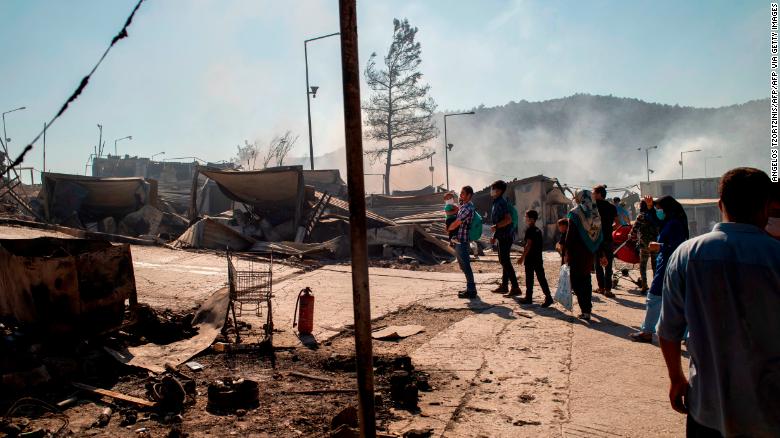 There are no reports of injuries so far, and authorities have said they are still assessing the scope of the damage.

George Moutafis, a photographer on the ground, told Greek TV channel Mega that the camp has been “completely destroyed.”

Migrants walk in the burnt camp of Moria on the island of Lesbos on Wednesday after a major fire broke out.

Refugees and migrants with their children gather on a bridge on Wednesday after the fire at the Moria refugee camp. 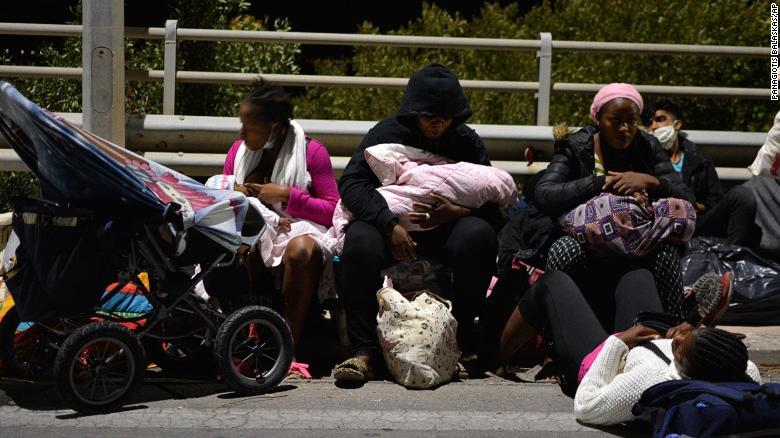 “The fires are now out. Many migrants and refugees are now back at the camp and looking for their belongings,” Moutafis said.

Charity and activist groups on the ground also say that the fire has destroyed large swathes of the camp.

The cause of the fire remains unknown, according to Greek authorities.

The camp is under lockdown after 35 people tested positive for Covid-19 earlier this week.

Local media suggested the fires may have been started deliberately.

Migrants on the ground also report that the fires were started by refugee protesters when a demonstration erupted over lockdown measures.

“Last night some people living in the camp were angry about the quarantine. They started a small fire.

“So the police came and there was tear gas. And then the fire grew and we had to run,” said a camp resident, who declined to disclose his full name for security reasons. 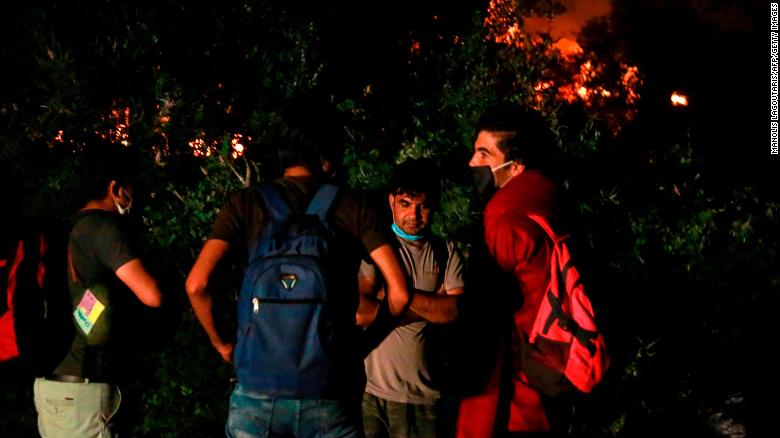 “All the camp is burned. There is nothing there. I am standing out on the street, near the camp, there are many people here. There is also police but they don’t tell us where to go,” said the resident.

“We have no food or water. They say ‘wait here.’ It is very hot today and there are women and babies.”

“Everything deteriorated quickly. The police did not contain the situation.”

Greek Prime Minister Kyriakos Mitsotakis has held an emergency meeting over the fires.

In an interview with the state public broadcaster, Government Spokesman Stelio Petsas said a state of emergency was being declared on the island and that Moria’s inhabitants would be banned from leaving the island over coronavirus concerns. 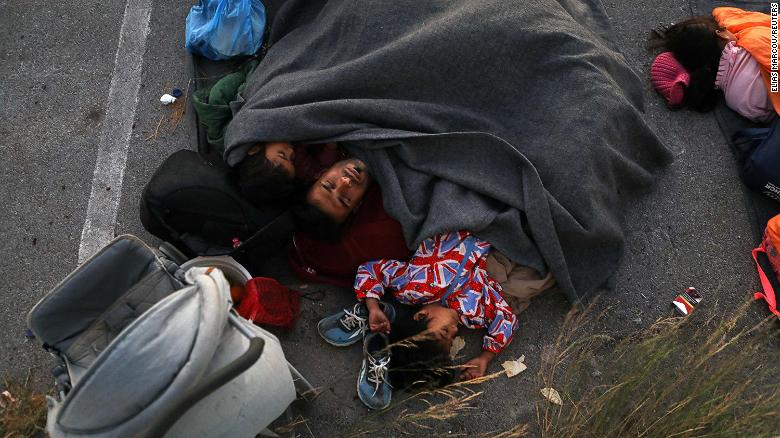 A family sleeps at a parking space, following the fire at the Moria camp.

Migrants stand outside the Moria camp on the island of Lesbos as major fire ravages the site.

Petsias said reports of arson and other potential causes were being investigated.

“In the evening, the anger and despair of the refugees who have been interned at Moria erupted,” the German charity group Mission Lifeline said in a statement.

“First there was a dispute at the Covid-19 station in the camp which spread to the entire area during the night. Security forces used tear gas,” the statement said.

“A large part of the dwellings burned down. The homeless people fled into the surrounding olive groves.”

Axel Steier, Co-founder of Mission Life, said he warned that the situation would “escalate” over the camp’s poor conditions, calling the lockdown measures “the final straw.”

“The people in Moria are exposed to extreme psychological stress. The lockdown of the camp has now been the final straw,” said Steier.

“The refugees in Moria are not treated as humans.”

Among other things, we asked the (German) federal government, again and again, to evacuate all people from the Greek camps. But hardly anything has happened,” Steier added.

The Moria encampment extends out of the main UN camp into olive groves where thousands live in makeshift wooden huts they built out of wood pellets and tarpaulin, hammered down with nails.

The inhabitants say they wait for hours to use a bathroom and sometimes spend an entire day queuing for food. 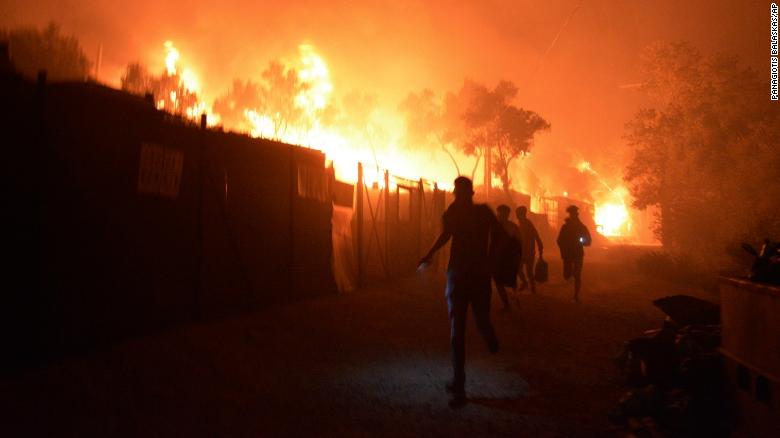 When CNN reported from the camp in March, a rank odour filled the air, the river was strewn in garbage and camp dwellers staged protests at the island’s main port on a nearly daily basis demanding transport to the Greek mainland.

A German charity group at the scene said a protest had earlier erupted at the camp over lockdown measures.

Refugees and migrants leave as a fire burns at the Moria refugee camp.

On Wednesday, migrant residents of Moria described being in a state of limbo, waiting for instructions from authorities among their charred belongings. 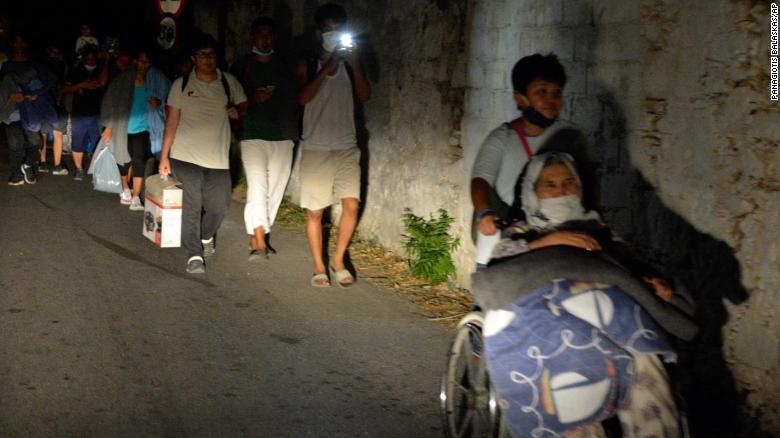 “We have been told nothing. No one has shown up,” said Muzangueno.

“We are here and we are waiting.”

In a statement Wednesday, the United Nations refugee agency says they have deployed staff to the ground and offered assistance to Greek authorities.

“UNHCR, the UN Refugee Agency, deplores the fire that largely destroyed Moria’s Registration and Identification Center (RIC) last night and thanks to the local authorities, including the fire department and emergency services that helped to contain the fire and assisted the people,” the statement said.

“What is happening in Moria is a humanitarian catastrophe,” tweeted Maas.

“As quickly as possible, we have to clarify with the EU commission and other EU countries willing to help, how we can support Greece.

“This includes the distribution of those fleeing amongst those in the EU willing to accept them.”