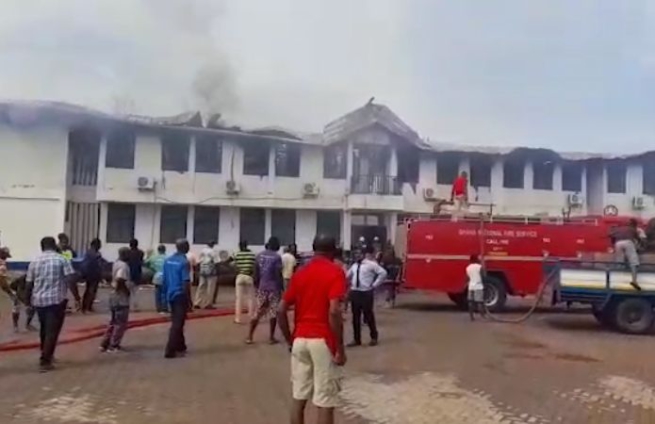 Ten offices in the administration block of the Mampong College of Education in the Ashanti Region have been destroyed by fire, Monday morning.

School authorities say the situation would affect the administration activities of the training institution.

The fire, according to eyewitnesses, started between 7 and 8 am, on Monday.

Some say the absence of a fire hydrant compounded the fight to bring the fire under control.

“If we had gotten here early, we could have stopped the fire from spreading. The Fire Service had to call for reinforcement because the tank was empty, but if there was a fire hydrant available the fire would have been put out earlier,” one of the eyewitnesses said.

The Ejura Fire Station came in with another fire tender to support the Mampong team before the fire was successfully dowsed.

According to Divisional Officer Grade Three and 2nd-in-Command at the Mampong Fire Station, Sulemanu Aryee, at their arrival, the fire was on the first floor and so far 10 offices were burnt but the ground floor was secured to prevent the fire.

He added that they are still investigating the outbreak of the fire.

“For now we are still on the investigation so at the appropriate time we will come out with the findings,” Mr Aryee said.

Meanwhile, school authorities say they have school documents to the fire.

Dean of Students at the school, Douglas Koranteng, says the situation will affect the day-to-day running of the school.

“All our documents have been completely burnt and this will affect teaching,” the Dean of Students said.

DISCLAIMER: The Views, Comments, Opinions, Contributions and Statements made by Readers and Contributors on this platform do not necessarily represent the views or policy of Multimedia Group Limited.
Tags:
Douglas Koranteng
Ejura Fire Station
Mampong College of Education
Sulemanu Aryee