First class UG graduate ventures into hairdressing after years of being jobless - MyJoyOnline.com 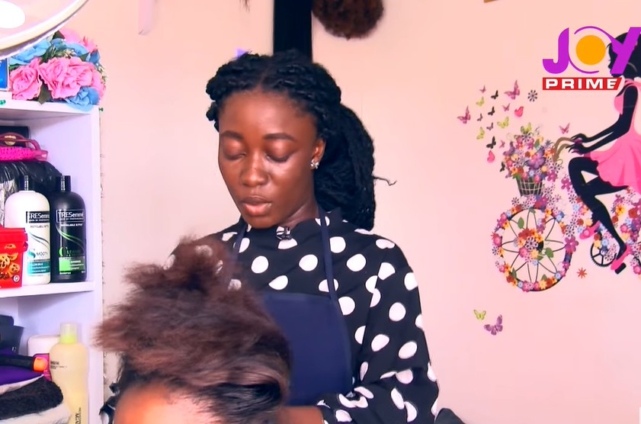 It is every graduate’s dream to land a job after spending about four years in school pursuing a degree.

For many youth, that dream is fast diminishing after years of being unemployed and Theresah Adusei is no different.

Theresah Adusei graduated with first-class honours in Information Studies and Psychology from the University of Ghana in 2019.

She was hopeful of landing a lucrative white colour job, however, after three years that hope of landing the ideal eight- to-five job has diminished. Since graduating, all Theresah focused on was landing a job.

“When I was about completing service, that was when I started a job hunt, but you send CVs you don’t get feedback,” the young lady said in an interview on Joy Prime.

One year after she failed to land a job, Theresah reminisced on her father’s words during her graduation. At the time, although he was happy to see her graduate, he was unimpressed with her first class degree.

“He said with a first-class, getting a job in this country is very difficult, I really felt sad. It was very heartbreaking, because I thought it was my breakthrough. So when I applied for a job in the Civil Service, went through the interview and everything, I thought I was going to prove him wrong, only for me to find out I wasn’t called.”

On numerous occasions, Theresah desperately appealed to many influential people, including her pastor, to help her land a good job.

However, all these efforts did not yield any fruits, further diminishing her hope of getting employed one day.

Although Theresah was trying her best, societal and family pressures kept mounting on her to find a job.

Being the first child of five, she felt burdened to get a job to support her younger siblings.

Hence, after years of job search and with no glimmer of hope, the first-class graduate decided to turn her hobby – hairdressing – into a day job.

Explaining her decision to turn to hairdressing, Theresah explained that “while I was on campus, I used to style my own hair and I used to style for my roommates too as well. They helped me discover that talent.”

However, not everyone was in support of Theresah’s foray into a vocation that saw no use for her university degree. One such individual was her mother, Jemima Adusei.

Hence, after spending so much on school, she could not handle seeing her Theresah settle on hairdressing. Moreover, she’s the first graduate in the entire family and they were hoping she will become a government worker.

Theresah noted that her mother was again worried about what she will tell her friends about her first class graduate’s new vocation.

Also, there were other persons who also questioned her trade, especially since some of them felt she settling as a hairdresser meant the young lady wasted her parents’ money on school.

For other people, Theresah was not pushing hard enough to land herself a well-paying job, but they may swallow their words “if only they were in my shoes.”

It’s been six months since the first-class graduate built a container saloon with the help of her father and a few close friends.

Theresah stated that at the very least, this job now weans her off financial support from her parents and puts her in a position to help cater for her siblings as well.

For the first-class graduate, the urge to hunt for a job had died down and she is also no longer interested in furthering her education.

The graduate fears that pursuing a master’s degree may even compound her woes.

She explained that she wants to focus on expanding the business she now finds herself in. Theresah stated that with some support, she could build a bigger shop and employ more people who are also in need of a job.

Theresah’s story reflects thousands of young brains struggling to make ends meet in an economy that constantly churns out more graduates than it creates jobs.

If analysts’ predictions about Ghana’s soaring unemployment rate are correct, the country is sitting on a ticking time bomb.