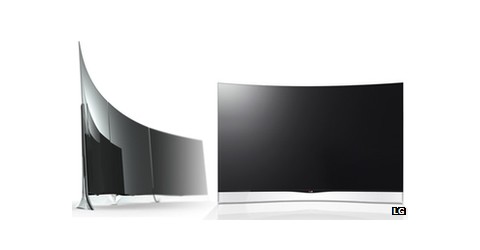 LG Electronics says it will begin deliveries of curved OLED television sets next month, making it the first to offer such a product to the public.

The use of organic light-emitting diodes allows screens to be made thinner and more flexible than before.

One analyst said that being first to market gave LG “bragging rights”, but suggested demand would be limited.

LG Electronics and its rival Samsung Electronics both showed off curved OLED TV prototypes at the Consumer Electronics Show in Las Vegas in January, but did not announce release dates at the time.

The two businesses are part of larger conglomerates that have separate divisions manufacturing their own television display panels. Many of their competitors buy in the components from third parties, making it harder for them to claim such an exclusive.

OLED tech is based on carbon-based materials that convert electricity into light.

While LCD screens need a backlight to illuminate their crystals, OLED does not need a separate light source.

This allows the newer type of TVs to be made thinner, lighter and more energy-efficient than before, as well as offering the advantage of deeper blacks.

In addition, the OLEDs can be fabricated onto a flexible plastic substrate rather than a rigid glass layer, making it easier to manufacture them into a curved screen.

“With more than five years research behind developing the optimum curvature, the entire screen surface is equidistant from the viewer’s eyes, eliminating the problem of screen-edge visual distortion and loss of detail,” the company said in a press release.

IHS Screen Digest, a market research firm used by television manufacturers, said it expected Samsung to follow with a similar product soon, although it noted that teething troubles with making large OLED TVs was likely to keep their prices high and output low in the near future.

The firm’s senior analyst Ed Border added that, in the short term, curved TVs were likely to be more valuable as a promotional tool rather than a profit-making product to their makers.

“There’s certain content which is great to see in different ways, but for a lot of what’s on TV seeing it curved is not necessarily going to improve the experience that much,” he said.

“But I think being curved is a good way of pushing the OLED technology to consumers and acting as a marketing tool.

“Looking forward, I think there will still be room for flatscreen TVs, especially if you are thinking of hanging an OLED screen on the wall or just want to buy a cheaper LCD set.”

LG said it was now accepting orders for the curved TV set in South Korea, and would announce the timing and pricing of versions for markets elsewhere “in the months ahead”.