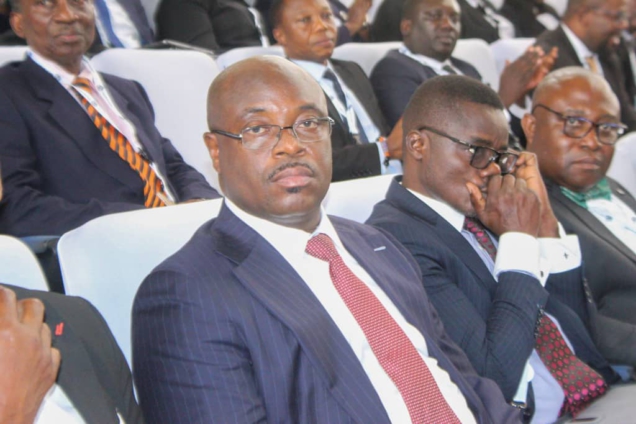 The Ghana Bar Association is set to have its Volta and Oti Regions Bar conference centres constructed with a seed amount of Ghc500.000 from the First Sky Group of Companies.

The National President of the Ghana Bar Association, Yaw Acheampong Boafo made this revelation in his address during the annual conference of the Association in Ho.

The Conference was organised under the theme: “Ghana’s Democracy under the Fourth Republic: Gains, Challenges and Prospects”.

Mr. Acheampong Boafo noted that it has become necessary and significant for the first Regional Bar Centres of the Association to be built in Ho to host its activities in the region.

“Therefore, it is significant that the first Regional Bar Centre of the Ghana Bar Association is to be built in Ho. I will have the privilege to cut the sod for the construction of the project this afternoon. I am happy to inform Conference that First Sky Group has pledged Five Hundred Thousand Cedis (GHC 500,000.00) towards the construction of the Bar Centre,” he said.

Mr. Boafo commended the Chairman of the First Sky Group, Eric Seddy Kutortse for the continued support towards the Ghana Bar Association.

He assured members of the Association of his commitment to making sure that, during his tenure of office, the Volta and Oti Bar Associations have a befitting edifice to serve as Regional Bar Centre.

“I am assuring all members that by the end of my tenure in office as National President, the Volta/Oti Bar will have a befitting edifice to serve as a Regional Bar Centre,” Mr Boafo said.

Talking about lawyers he said, it is indubitable that lawyers have been at the forefront of the establishment and maintenance of democracy in Ghana long before independence and even in the absence of a Bar Association.

Mr. Yaw Acheampong Boafo said lawyers in Ghana and by extension, the Ghana Bar Association have since the turbulent and uncertain days of the Second and Third Republics continued to fight for a truly democratic and progressive society at all times at great personal and institutional cost.

This, he said has culminated at the end of military rule, a return to civilian constitutional rule through a referendum and the establishment of the 4th Republic in 1993 under the aegis of the 1992 Constitution.

“In sum, Ghana and Ghanaians for that matter, have thus enjoyed 30 years of uninterrupted democratic rule under the 4th Republic- indubitably the longest period of political stability since Independence in 1957. That makes the 4th Republic very special and unique in the scheme of things. It is tellingly significant,” he said.

He noted that, “as stakeholders and beneficiaries of the 4th Republic, we are all well placed to assess, evaluate and determine the extent to which the present democratic dispensation has served us as a nation and our interests as well as aspirations as a people.”

DISCLAIMER: The Views, Comments, Opinions, Contributions and Statements made by Readers and Contributors on this platform do not necessarily represent the views or policy of Multimedia Group Limited.
Tags:
First Sky Group of Companies
Ghana Bar Association
Lawyers annual conference