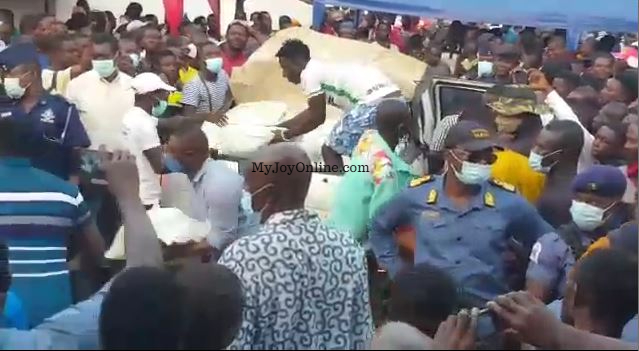 Fishermen in Elmina have rejected food items provided by the Minister of Fisheries and Aquaculture Development, Mavis Hawa Koomson.

According to the Fishermen, they rejected the food items because the Minister had announced to them that when the Closed Season opens, she will not entertain light fishing on the sea again.

Light fishing is the process of fishing that attracts fish by hooking, gill-netting or by any other gear.

The light source may be by means of a fire torch, pressure kerosene lamp, gas-lit lamp and battery or generator assisted incandescent lamp.

Fisheries experts say such practices are inimical to the growth of the fishing industry but the fishermen at Elmina insist, it remains one of the ways of survival in the fishing business.

They are, therefore, of the view that, should the law be enforced by the Minister, they would be deprived of their livelihood.

Even though the ban on fishing is expected to be lifted on Sunday dawn, the fishermen say, the Minister’s stance on light fishing was worrying.

According to them, asking for cessation of light fishing is tantamount to going hungry because the resources in the sea have depleted and they cannot do without that method of fishing.

The angry fishermen jeered and booed at the Minister and her entourage who had packed bags of rice and gallons of cooking oil ready for distribution.

They chanted war songs indicating their protest. “Yeengye oooo yennngye oooooo,” meaning, “we will not accept them, we will not collect them.”

The Minister’s entourage had no option other than to pack the items back into a waiting pick-up truck.

Not even the intervention of the Omanhen of the Edina Traditional Area, Nana Kwodwo Conduah, could change the minds of the fishermen.

“We have endured the closed season with its attendant hunger and other difficulties. It is not today that the season is almost over, three days, that she is bringing us food,” one fisherman remarked.

The Minister and her entourage had to leave the hostile environment.

DISCLAIMER: The Views, Comments, Opinions, Contributions and Statements made by Readers and Contributors on this platform do not necessarily represent the views or policy of Multimedia Group Limited.
Tags:
2021 closed season
Elmina Fishermen
Mavis Hawa Koomson