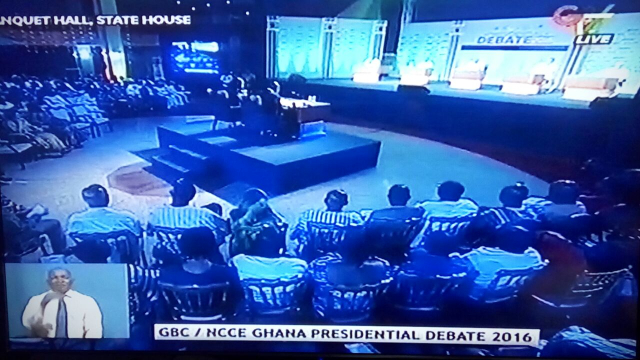 Out of the seven presidential candidates contesting in next week's presidential election, five are partaking in this debate.

All of them are eyeing to occupy the one seat at the Flagstaff House and they are working hard to convince Ghanaians to get their votes.

They have tried through campaign tours but is time to answer questions of how they intend to solve the challenges facing the country.

The debate is moderated by Mr Dan Afari Yeboah and Selikem Acolatse all of GBC.

The five candidates take the opportunity to introduce themselves officially to Ghanaians and why they want to occupy the highest position of the presidency.

JOY
It does not.  There is the need to set up an education commission to investigate the current challenges and to concentrate more on technical and vocational education. There will also be the need for the introduction of jury practitioners where experienced hands will go back to the schools to assist.

Nduom
The system does not prepare the children adequately for the challenges of the 21st century. The constitution talks about Free Compulsory Education but we have failed as a country to do that. Worldwide there is the compulsory aspect which every serious country implements but we have not. We need to get back to the basics and solve that before we can think about empowering them for jobs.

John Mahama
There was an educational system inherited but currently, there are reforms. There was a conference put together by industry and academia in order to find out mutual problems and solutions. However, the institutions of higher learning are still concentrating on the humanities when indeed industry is looking for engineers. That must be solved.

Greenstreet
No, our current system does not solve the challenges. About 60 percent of the populace are illiterates. They must acquire the skills needed. It is a complete problem that requires a nonpartisan approach.

Greenstreet
We have been scratching the surface; We must add value to our raw materials. Import substitution is important. It is important to grow millet jute sacks and other crops.

Edward Mahama
Edward Mahama will lead rice growers in Ghana and help reduce rice importation. Shea is more important than cocoa and attention will be given to it.

JOY
Restructuring of education and industry to solve the unemployment situation. The Ghanaian economy is robust. It has natural resources. The Ghanaian dream which is about industrialisation will be harnessed. Even the sun will be used as a resource. Thousands of employment can create even through mining extension programs.

NDUOM
The home of job creation is the PPP. My running mate is helping women by providing jobs and so is Nylander who is providing jobs for youth. There will be rice revolution and we have built plants already. Cashew will be processed and create jobs for people in technical university. There is tourism which can be developed where millions of jobs can be created.

John Mahama
Everybody is throwing figures about. There is the world bank figure. There are 600,000 people on government payroll yet when people complete school they want government to employ them. It is the private sector that employs but government needs to create the congenial environment.

Multiplicity of taxes, high interest rate and inflation. What are you doing to solve that?

Businesses depend on power to make progress. Under dumsor, businesses are suffering. There is the need to balance the budget and streghten the cedi. Find innovative ways of raising revenue.

National Identification infrastructure. There has to be a prudent management of the natural resources. Sports will be used as wealth creation. Private sector will be key in managing all these and will be the centre and the engine of growth.

Three solutions. Reforming the public sector. Make it lean. Declare a state of emergency and spend less money. Make the public sector business friendly. Use personal ID system in every economic transaction. There are fewer people paying taxes. The few people paying are being strangled more with taxes. If you don't grow the economy it becomes a challenge. There is the need to use long term pension monies and not loans.  I will run the administration with not more than 40 ministers. No member of my government can get medical care abroad if i become president except with the person's private cash. The wastage of government resources is also a problem. We must lower the tax rate and collect more.

We are solving all that. Deficit has been brought down. It used to be high up around 12 percent. It has reduced. Growth of the economy will pick up next year. People are not filing their tax records. There is a common data base for all tax institutions. There is a huge informal sector which are not being tax. Giving informal sectors are being given incentives to pay their taxes. If you file properly, you will be given tax incentives.

The taxes is a lazy approach of raising revenue but we need the money. We don't produce anything and that is a problem. We must  find areas of comparative advantage. Continue with more import substitution methods. Sugar is a good example. There is also excessive borrowing.

The National Electronic Data infrastructure is key. The NHIS i believe is working but it is human institution. There is corruption and there is the need to minimize the human element. It must be expanded to look at the sicknesses. The root causes of the problem must be looked at. If you want to solve malaria, you deal with stagnant waters. I will combine sports and health.

The use of the identification system is necessary to improve the use of the NHIS. The PPP is more concerned about prevention such as malaria, cholera, meningitis. There will be proper environmental cleanliness and adequate provisions made to learn prevention.  We must reduce that overload on the scheme.

NHIS passed in 2005. Actuarial study predicted that in ten years the program has to be reviewed. Under my administration the review has started. A new funding source needs to be looked which we are working on. Claims implementation also has to be looked at. With 29million visitations per annum this scheme is not a collapsed one but to strengthen it more a percentage of petroleum revenue will be used to fund the NHIS

The scheme must be depoliticised and run by experts and health professionals. There has to be multi-sectoral, sports, health, sanitation ministeries all sitting to find a more comprehensive ways of solving the problem. We are also keen on strenghtening traditional medicine and give them training.

One of the problems of NHIS is cash flow. The 2.5% should not sit in the consolidated fund but must go straight to the Authority. President Mahama must use the petroleum revenue to help fund the NHIS so that when i come in January the system would have been brought

Is Corruption a problem in Ghana and how do you intend to solve it ?

At least 2 billion cedis annually is lost to corruption. Let's examine the constitution and bring in an independent prosecutor. Corruption is a huge problem. Deal with corruption in a personal way. Presidents must declare assets publicly. In America, April 15, the president files his income tax. If the first person, the president doesn't pay tax what moral authority does he have to demand others to pay?

There is the National anti-corruption action plan to fight corruption. Sadly as a country we are more interested in anecdotal corruption rather than the efforts being made to fight corruption. We are working to reduce cash in public payment. In 2021 government will not accept cash. There is the need to educate people on what gift giving is and how it can corrupt public officials. There must be political will to prosecute those found to be corrupt.

National Anti corruption action plan is a consensus plan agreed by all to fight corruption. We need to remove this blot and stain in all facets of society. It must be rooted. It can only be done by a government elected into power solve it.