#FixTheCountry, Arise Ghana and others confirm participation in ‘Ku Me Preko Reloaded’ demo 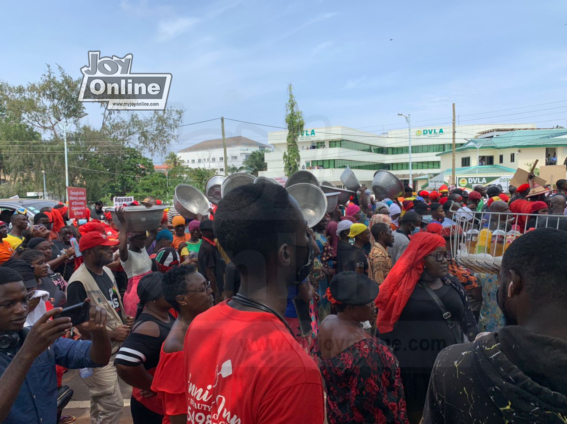 At least six identifiable groups including #FixTheCountry and Arise Ghana have signed on to partake in the “Ku Me Preko Reloaded” demonstration scheduled for Saturday, November 5.

The demonstration being organised by private legal practitioner Martin Kpebu is already garnering support from civil society organisations and the general public who think government has not done enough to alleviate the plights of citizens in the struggling economy.

Martin Kpebu, an outspoken critic of the government, has made known his dissatisfaction with the president’s speech on the economy and called on Ghanaians to join in the protest on Saturday.

The protest is to compel President Akufo-Addo to resign as the head of the state.

“The government is blaming speculators for the fall in the cedi instead of tackling its depreciation… we will call on His Excellency to resign so that we can have fresh blood, fresh ideas,” he told JoyNews in an interview.

The ‘Ku Me Preko Reloaded’ demonstration is due to start at 7 am at the Obra Spot at the Kwame Nkrumah Circle.

According to Martin Kpebu, the exercise will be a reenactment of the historic 1995 ‘Ku Me Preko’ demonstration against the then Rawlings administration, where Mr Akufo-Addo played a lead role.

The call by Martin Kpebu adds to the scores of public agitations in the midst of the crippling economy.

Currently, Ghana’s economy is reeling under pressure with the local currency consistently losing its value to the US dollar and other major trading currencies across the globe.

This has sparked widespread calls for the resignation of the Finance Minister, who according to some sections of the populace, has failed woefully in the discharge of his responsibilities.

The economic difficulties have also resulted in what many have described as untold hardship among Ghanaians.

According to the critics, the government has failed woefully in resolving the economic crisis and offering relief to the citizens who are feeling the brunt of the situation.

Meanwhile, President Akufo-Addo has reiterated the commitment of his government to dealing with the prevailing challenges and helping put smiles back on the faces of Ghanaians.

At the moment, Ghana is finalising talks with the International Monetary Fund in a deal which is expected to stabilise the Cedi and inject some relief into the country’s ailing economy.

DISCLAIMER: The Views, Comments, Opinions, Contributions and Statements made by Readers and Contributors on this platform do not necessarily represent the views or policy of Multimedia Group Limited.
Tags:
#FIxTheCountry
Arise Ghana
Fix The Country
Ku Me Preko
Martin Kpebu