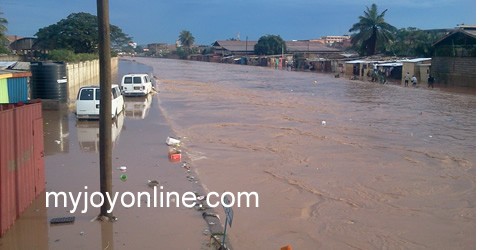 Four people, including three young girls, drowned in Kumasi on Wednesday evening during a heavy downpour.

Two of the girls, who were siblings, identified as Gloria Dankwa, 8 and Maame Adwoa,2 were swept away by flood waters at Asuoyeboa, a suburb of Kumasi, after the River Abonsua, which had overflowed its banks, entered their residence.

The other two, identified as Emmanuel Boateng, 31, and Jessica Oppong , 7 drowned when they attempted to cross the Akos stream which had overflowed its banks at Adoato-Kokoso.

The bodies of Boateng, Oppong and Dankwa have been deposited at the Komofo Anokye Teaching Hospital mortuary for autopsy, but that of Maama Adwoa was yet to be recovered at the time of filing this report.

According to the Sofoline District Police Commander, Superintendent Cosmos A. Damoah, Ms Gladys Oppong, mother of Jessica, had closed from work and was going home with her daughter during the heavy downpour.

On reaching the banks of the Akos stream, she decided to wait for the stream to recede because it had overflowed its banks.

While she was waiting by the banks of the stream, Boateng, a worker at JOKAS Poultry Farm, apparently also going home, showed up to cross the stream.
Ms Oppong was said to have warned Boateng of the danger ahead but he insisted on crossing the stream.

With that confidence expressed by Boateng, Ms Oppong pleaded with him to carry one of her daughters to cross the stream.

Unfortunately, while Boateng and Little Oppong were crossing the stream, they got drowned.