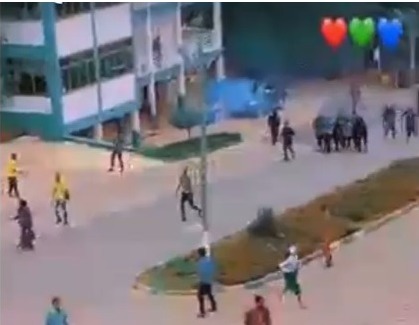 The video was reportedly recorded by a student when the personnel visited the scene to disperse the protestors.

Students of the Islamic Senior High School in Kumasi thronged the Abrepo Junction-Barekese road to protest frequent crashes of pedestrians, including their colleagues and teachers of the school.

Reports indicate there was vehicular and human traffic on that stretch for more than an hour before the Police were called in to clear the road.

Subsequently, some Police personnel were deployed to the School to maintain law and order.

But in the disturbing video, a constabulary of officers are seen behind shields and charging on the students amidst firing tear gas.

The protestors are then seen running helter-skelter, away from the scene.

“Jesus!” a student is heard saying in the background.

Meanwhile, 25 students are reported to have been rushed to the hospital following the clash.

In an interview with JoyNews few minutes after the incident, a Spokesperson of the Education Ministry, Eric Opoku Mensah, said efforts are underway to bring the situation under control.

He added that the Regional Director of Education is following up on the matter to ensure all students admitted at the hospital are well catered for and safe.

He, however, stressed that they have not treated any traumatic injury like that of gunshot wounds.

According to him, the students rather suffered respiratory distress.

DISCLAIMER: The Views, Comments, Opinions, Contributions and Statements made by Readers and Contributors on this platform do not necessarily represent the views or policy of Multimedia Group Limited.
Tags:
Islamic Senior High School
Police
Tear gas