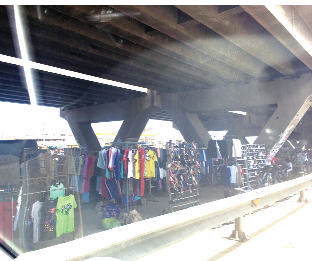 Some footbridges and overpasses in Accra have been turned into marketplaces, making it difficult for pedestrians to have their right of way.

Oblivious to the dangers inherent in their actions, the traders, including car dealers, display their wares and vehicles on the footbridges and under the overpasses to attract clients.

That practice by the traders compels pedestrians to walk on the shoulders of the road at areas such as Caprice in Accra, where cars, bicycles and motorcycles are virtually strewn on the pavement.

The practice exposes the traders to the danger of metal containers falling from moving vehicles and drivers running into the containers due to possible brake failure.

Such accidents have occurred before at the Kwame Nkrumah Circle, the Mallam Overpass and Ashaiman, all in the Greater Accra Region, and Oforikrom in the Ashanti Region.

At least five persons died, while 10 others sustained injuries, from those accidents last year.

There was the collapse of at least five of such structures in India, the US, Brazil, Nigeria and Egypt in 2018 and early last year.

The pedestrian walkways at Spanner Junction, Shiashie, near the Tetteh Quarshie Interchange; the Kwame Nkrumah Interchange; the Achimota Overhead and the Mall, Taifa Junction, Spot M and Ofankor Roundabout, all on the Accra-Nsawam Road, have become marketplaces where everything, from cooked food, foodstuffs, footwear, clothing, cosmetics, herbal medicine, furniture to plastic products, is sold.

And at the Spot M Timber Market on the Achimota-Ofankor Road, wood dealers have turned the pavement into a parking lot where pick-up trucks have blocked pedestrian walkways.

The situation is no different at the Akweteyman and the Lapaz footbridges, where fruit sellers and second-hand goods vendors have turned the space under the footbridges to markets. There is hardly any space for pedestrians there, who have resorted to walking on the shoulders of the road, a practice that has become infamous for pedestrian knock downs.

Attempts by the municipal authorities in Okaikoi North to clear the traders have not yielded any fruits, as the traders continue to play hide and seek with the officials.

A resident, Mr Roland Agobo, said there were days when the pavement would be free of traders, only for one to return the next day to meet them.

“Sometimes you come here and the place is free. Another time you pass by and the whole place looks like a jungle. It is frustrating because you have no choice but walk on the road, which is also dangerous,” he added.

Some of those areas have gained notoriety for heavy traffic following their proximity to bus stops which commercial vehicle drivers have turned into lorry stations.

There are also food vendors close to some fuel stations and the naked fires used by the vendors pose a danger to running engines at the fuel stations.

Within Accra, the pavements are not spared. The pedestrian walkways close to the COCOBOD Head Office, the Central Motor Traffic and Transport Department and Kaneshie are all centres of chaos where pedestrians hustle and sometimes engage in verbal exchanges with traders.

It appears some of the assemblies have approved the illegality. A trader at the Ofankor Overpass told the Daily Graphic that until recently they were made to pay 50Gp to what is now the Okaikoi North Municipal Assembly.

Across the overpass, another group of traders has lined up on the pedestrian walkway, doing brisk business. What started with a few women selling foodstuff has blossomed into a major market.

The situation is made worse by commercial vehicle drivers who park at the bus stops calling passengers, creating major gridlocks at the roundabouts during rush hours.

Over the years, sustaining decongestion exercises has become both a political and economic issue.

Outside Accra, the Kasoa Interchange is another area where the local assembly has legitimised the sale of wares on pavements by erecting structures for the traders.

The traders have, over the years, resisted attempts by the authorities to move them to a new market located off the Bawjiase road.

Although the interchange was meant to help clear traffic around Kasoa, the activities of the traders have rather compounded the problem.

A section of a busy road way overpass collapsed in the centre of the Brazilian capital, plunging slabs of concrete on top of parked cars and an outdoor restaurant.

A pedestrian bridge collapsed onto the Tamiami Trail in Florida, resulting in six deaths, eight injuries and eight vehicles being crushed underneath.

At least 18 people were killed and dozens trapped in the Indian city of Varanasi after a flyover collapsed, crushing vehicles beneath it. The flyover was still being built when portions of its cement structure fell on the road being used under it.

A bridge on the Mokwa-Jebba road in Kwara State collapsed in the night following heavy rainfall.

A highway overpass collapsed in the Indian city of Kolkata, with a concrete segment slamming to the ground and killing at least one person.

DISCLAIMER: The Views, Comments, Opinions, Contributions and Statements made by Readers and Contributors on this platform do not necessarily represent the views or policy of Multimedia Group Limited.
Tags:
Footbridges
market