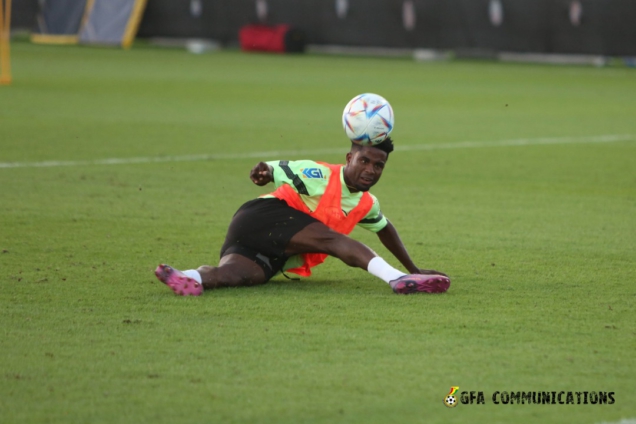 Former midfielder of Accra Hearts of Oak, Esme Mends, is urging star striker, Daniel Afriyie Barnieh to forget about the CHAN tournament and leave the rainbow club in an attempt to seek greener pastures abroad.

He believes if there is an opportunity for Barnieh to join any interested club abroad, the player should not risk it by playing in the CHAN tournament.

The 21-year-old Black Stars striker, according to media reports, is running out of contract with the Phobians this month, with concerns that the player will not extend his stay at Hearts of Oak.

Failure to sign the contract extension may cost Afriyie Barnieh a place in the Black Galaxies of Ghana team ahead of the CHAN tournament in Algeria next month because the tournament is for players with permanent running contracts with local clubs.

It is understood, the management of the former Ghana Premier League champions have made efforts to renew ties with the young attacker but according to reports, Barnieh is not willing to extend his stay at the club.

This development has divided opinions of fans of the club and former players of the team. While others think Barnieh should leave the team now, a good number of the fans have called on him to stay at the club.

Speaking in an exclusive interview with Luv Sports on Kick Off, Esme Mends, who spent five years at Hearts of Oak between 2008 and 2013, advised Afriyie Barnieh to forget about the CHAN tournament and leave Hearts of Oak.

“If I am to advise Barnieh concerning this CHAN and moving out, I will just say, Barnieh should move out because if he goes to this tournament, picks up an injury, what next for him?

“Players have their dream, they have their targets, they have their goals, I know definitely Barnieh’s goal is to play in Europe. This is the opportunity; he has been to the World Cup so missing the CHAN shouldn’t be an issue.

“You grab what’s in your hands. There is no guarantee in life, so if you don’t grab today, that’s it, some opportunities don’t come back,” he said

Esme Mends is however hoping Barnieh extends the contract in order for the club to benefit from any impending transfer.

“The last conversation I had with him, he wants to sign, he wants Accra Hearts of Oak to make some money so I don’t want people to paint the boy black, I will urge people not to blame him.

Afriyie Barnieh is currently in camp with the Black Galaxies preparing for the 2023 African Nations Championship (CHAN) slated to be held in Algeria between Jan 13, 2023 – Sat, Feb 4, 2023.

DISCLAIMER: The Views, Comments, Opinions, Contributions and Statements made by Readers and Contributors on this platform do not necessarily represent the views or policy of Multimedia Group Limited.
Tags:
Daniel Afriyie Barnieh
Hearts of Oak