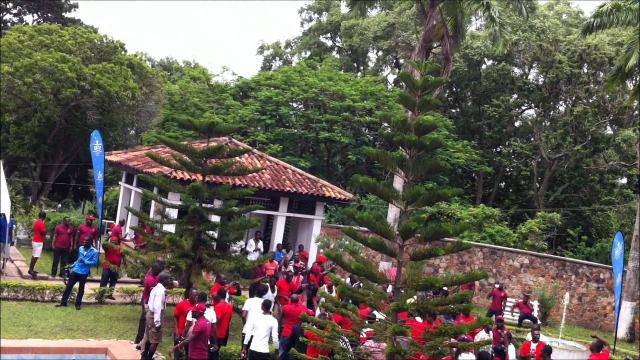 The 2016/2017 executives of Commonwealth Hall, University of Ghana are set to sue the university for what they say is the unfair exclusion of their names from the 2017 graduation list.

The university has excluded the names of the students from the graduation list over claims that they masterminded an unlawful march in February 2016.

That march led to the destruction of school property.

Speaking to Myjoyonline’s Oswald Azumah, the vice president, Rufus Ashitey Armah, said the march was a convention that members of the hall undertake in the early weeks of each semester and that they had no knowledge of it.

“Besides that, we had just been made executives and we weren’t in the know of the said march because unlike previous years, the permission was not granted for us to march in 2016 so we the executives didn’t know when some members of the hall carried out the march unlawfully,” he said.

Also, the perpetrators were apprehended by the hall authorities and were punished, he added.

“But in March this year we the executives were summoned before the university’s disciplinary committee to be queried about the case. This came as a shock to us because we thought the matter has been dealt with since the partakers in the said march were brought to book," he said.

He revealed further that prior to the exclusion of their names from the list they were frustrated in many ways because the disciplinary hearing was held during exams period.

He said the exams hall the attendance sheet they signed had ‘under investigation’ beside their names.

"We presented our alibi to them and made them know that the perpetrators have already been punished and they said we will hear from them” he stated.

According to him, they made many follow-ups to the university authorities to get the matter settled but after many attempts, their efforts yielded no results.

According to him the registrar of the university wrote to them in October to inform them that the matter was still under investigation which also came as a surprise because they don’t know exactly why the matter had dragged for so long.

“So we were very disappointed when the graduation list was released on November 1 and our names were missing”, he said.

Mr. Armah said their legal representative has written to the university authorities and given them a November 10 ultimatum to update the list and include their names or face legal action.