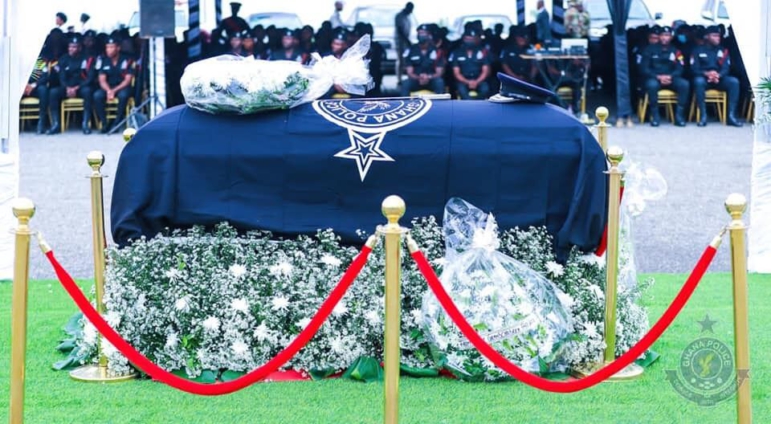 Present at the service was Vice President Dr Mahamudu Bawumia, IGP George Akuffo Dampare and other dignitaries in the police service.

In a post on Facebook, the Police noted that ”we are forever grateful for his contribution to the Ghana Police Service in particular, and to the country as a whole.”

“We will continue to work hard to build on the foundation he and all others like him laid for the advancement of the Service. Rest well Sir, you are forever in our hearts.”

The late Inspector-General of Police, Mr Charles Odartey Lamptey, (Rtd) aka C. O. Lamptey, applied for an appointment in the Ghana Police Service on 9th July 1965, while working in the Ministry of Communication as a Senior Executive Officer.

His application was eventually approved by the then president and he was subsequently transferred to the Police Service and appointed Deputy Superintendent of Police on 25th November 1965.

Immediately after his appointment he joined the cadet course and was commissioned into the officer corps in January 1966. By dint of hard work, he earned further promotions as follows:

Mr. Charles Odartey Lamptey, (Rtd), after serving with high commitment and diligence, was appointed the Inspector-General of Police on 5th June, 1979; a position he held until his retirement from the Service on 27th November 1979.

DISCLAIMER: The Views, Comments, Opinions, Contributions and Statements made by Readers and Contributors on this platform do not necessarily represent the views or policy of Multimedia Group Limited.
Tags:
former IGP Odartey Lamptey
Ghana Police Service