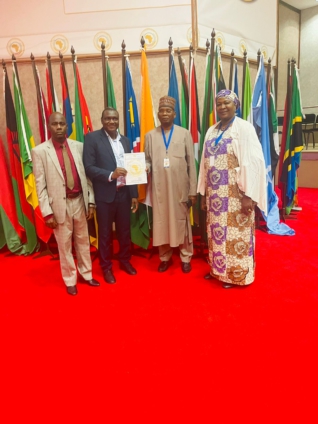 Idrissa, who is the founder of 54 Foot is expected to lead to improve the continental legislative body’s visibility through sport.

The appointment of the retired Idrissa (45), who is currently chief executive of Niger-based Foot Media Group and advisor to the Cosafa president dovetails with PAP’s plans to engender socio-economic development across Africa even through sports.

In a letter of appointment to Idrissa dated November 8, Chief Charumbira said the Niger national soccer team ex-footballer was chosen owing to his vast experience.

”In view of your experience and influence in the football industry, the Pan African Parliament looks forward to working with you in contributing to sports development on the continent as well as enhancing the institution’s visibility through sport,” read part of the letter written by Chief Charumbira.

”Additionally, one of the critical functions of the PAP as espoused in Rule 4(1)(c)(i) of the PAP Rules of Procedure is to ”participate in creating awareness among the peoples of Africa on the strengthening of continental solidarity, cooperation, and development.”

Added the PAP president in his letter to Idrissa: “We firmly believe that sport plays a pivotal unifying role not only within the Member States but also across the continent. We thus throw down the gauntlet to you as our Ambassador to assist the Pan African Parliament to advance continental solidarity, unity, and integration through sport.”

The appointment comes as PAP is pivoting to become an effective organisation that positively impacts the lives of African people in a new drive for the continental legislative board’s Bureau that swept into office on the back of a vision to reinvigorate, renew and reposition PAP for the betterment of the continent’s citizens.

DISCLAIMER: The Views, Comments, Opinions, Contributions and Statements made by Readers and Contributors on this platform do not necessarily represent the views or policy of Multimedia Group Limited.
Tags:
54 Foot
Issoufou Idrissa
Pan African Parliament