FPSO Kwame Nkrumah to be fully restored in mid-2018 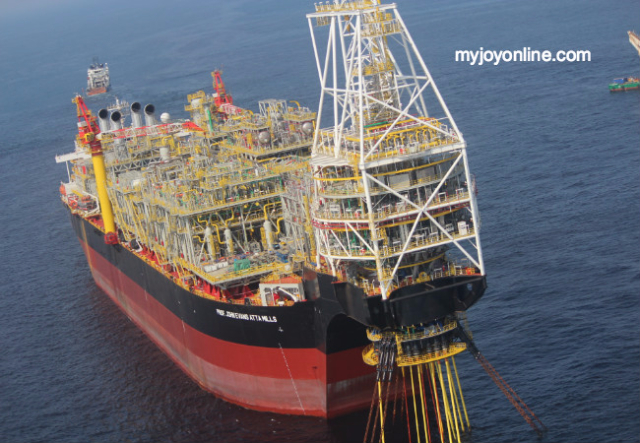 Installation of a deep water Catenary Anchor Leg Mooring (CALM) buoy on Floating Storage and Offloading vessel (FPSO) Kwame Nkrumah as the final phase of repair work in the first half of 2018 is expected to restore full offloading functionality.

This will remove the need for the DP shuttle and storage tankers, which has increased as­sociated operating costs.

Market inquiries are currently ongoing to estimate the cost and schedule for the fabrication and installation of this buoy.

This was contained in Kosmos Energy Limited’s second quarter financial and operating results.

It said Kosmos and its partners have established that the pre­ferred long-term solution is to convert the FPSO to a perma­nently spread moored facility, with offtake through a new deep- water CALM buoy.

It noted that the first phase of this work would involve the in­stallation of a stern anchoring system to replace the three head­ing control tugs currently in the field, which is expected to be complete by the end of 2016.

According to the statement, the partners then plan a second phase of work to remove the load of the turret and risers from the bearing to allow the FPSO Kwame Nkrumah to be rotated to its optimal spread moor heading in the first half of 2017.

These first two phases of work are expected to cost up to $I50 million gross, and it is estimated that the Jubilee FPSO would need to be shut down for 8-12 weeks during the first half of 2017.

The statement said upon com­pletion of the spread mooring work programme, production is expected to return to the levels achieved before the turret bearing issue occurred.

During the second quarter, gross sales volumes from the Ju­bilee field averaged approxi­mately 45,000 barrels of oil per day (bopd).

Production during the quarter was impacted by downtime asso­ciated with the turret bearing issue identified on the Jubilee FPSO in February 2016.

This issue required the imple­mentation of new operating pro­cedures, including the use of tug boats for heading control and a dynamically positioned (DP) shuttle tanker and a storage ves­sel for offloading.

These new operating proce­dures necessitated the FPSO being shut down for an extended period in April, with production resuming in early May.

Once the new operating proce­dures were in place, field produc­tion gradually increased, and in June, it averaged around 90,000 bopd gross.

These procedures are continu­ing to work effectively, and for the second half of 2016, produc­tion is anticipated to average approximately 85,000 bopd.

The partners will continue to review potential opportunities to improve the efficiency of offtake procedures.

Kosmos anticipates that the fi­nancial impact of lower Jubilee production, as well as the addi­tional expenditure associated with-the damage to the turret bearing will be mitigated through a combination of the comprehen­sive Hull and Machinery insur­ance, procured on behalf of the partnership, and the Loss of Pro­duction Income (LOPI) insurance obtained by Kosmos.

Recently, the providers of our LOPI insurance have agreed on a framework to reimburse Kosmos for lost production.

The framework provides for LOPI insurers to reimburse Kos­mos for lost production on a monthly basis, minimising the impact from reduced near-term production.

The first claim is expected to be filed in August, with payment anticipated to be received in late September.

The TEN project remains on schedule and on budget, with the project now 99% complete and expected to deliver first oil shortly, consistent with the oper­ator’s guidance.

Eight of the 11 previously drilled wells have now been com­pleted. Hook-up and commis­sioning of the FPSO, connecting the pre-drilled wells to the vessel via the subsea infrastructure, is nearing completion.

A gradual ramp up in oil pro­duction towards the FPSO capac­ity of 80,000 bopd is anticipated around the end of 2016 as the fa­cilities complete performance testing and well production lev­els are increased to optimal rates.

Per operator guidance, aver­age annualised production from TEN in 2016 is expected to be approximately 23,000 bopd gross during the year, which equates to an average of approximately 55,000 bopd while it is online in 2016.

Associated gas production at TEN is expected to be re-injected into the Ntomme reservoir gas cap until gas export begins.

Gas export was planned to commence 12 months after field start up, with the Tweneboa gas reservoir coming on stream a fur­ther 12 months later. However, plans to accelerate gas export are currently under evaluation as the fabrication of the gas export fa­cilities has been completed early and can be installed by year end, allowing connection to the exist­ing gas infrastructure early in 2017.