Free press not under attack under my administration – Akufo-Addo 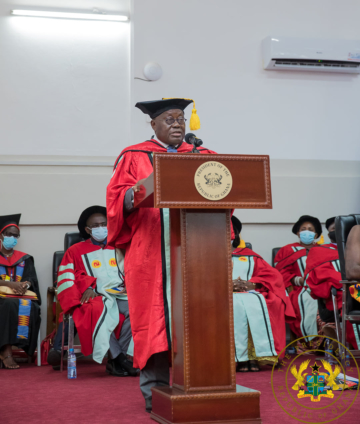 President Akufo-Addo has debunked accusations by some Ghanaians that free press is being attacked under his government.

The president argued that his credentials can be surmised in his belief in constitutional rule, freedom of the media; as well as separation of powers with a private sector that unleashes the energy of the people to prosper.

He made this statement when the University of Cape Coast on May 29, conferred on him a Philosophy of Doctorate Degree in Educational Leadership.

The honour, the University said, is as a result of his introduction of the Free Senior High School policy, which has increased access to education in the country.

The conferment of the honor was done by the Chancellor of the University, Sir Sam Essoun Jonah.

Subsequently, the President told the congregation accusations of attacks against dissenting views under his administration are false.

The president, in his attempt to justify why he believes the accusations are false, elaborated that since the mid-1970s when made his first entry into national politics, under the Kutu Acheampong regime, he joined the fight to end military rule and restore democracy.

“I have by the time firmly made up my mind what will be the best way to govern our country to ensure that we would achieve the free, just, and United Nation that our forefathers envisaged in starting the fight for the independence of Ghana,” he explained.

According the President, he has been in many battles together with others which has led Ghana to where we are today in the media space.

“We did not wake up one morning to find ourselves with over 400 media stations and a dozen of television channels instead of one radio station and one television station, both owned by the state and under the firm and unrelenting control of government.

“The criminal libel law which has been part of our legal architect for decades did not just suddenly disappear from our laws,” he said.

The President further emphasised that he has been a part of and occasionally led the struggle for individual rights and freedom of the Press in this country.