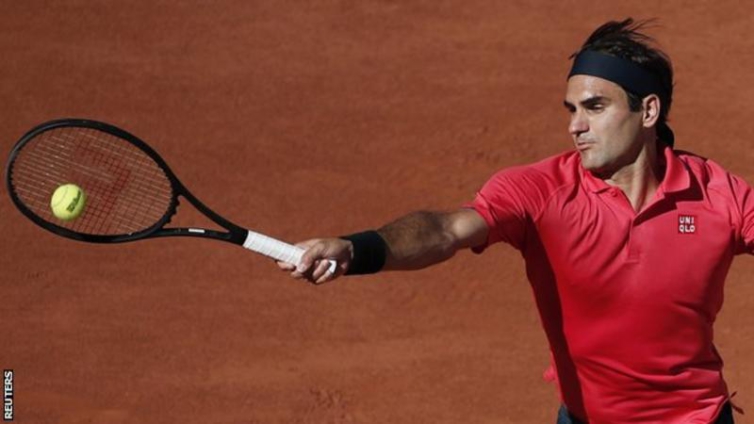 Federer, who is seeded eighth, won the French Open for the only time in 2009

Roger Federer eased through his French Open return with a straight-set win over Uzbekistan’s Denis Istomin.

The 20-time Grand Slam champion had not played at Roland Garros since 2019 and was playing his first match at a major in 16 months after a knee injury.

Meanwhile, Russian second seed Daniil Medvedev ended his misery at Roland Garros as he beat Alexander Bublik for his first win on the Paris clay.

Federer was the star attraction in the men’s singles on the second day of the clay-court Grand Slam, though, reintroducing himself to the top level after missing the past three majors.

The Swiss, who turns 40 in August, was playing in a Grand Slam for the first time since the 2020 Australian Open semi-finals, having needed two knee operations during the pandemic.

He returned to the match court at Doha in March, beating British number one Dan Evans in his comeback match before losing to Georgia’s Nikoloz Basilashvili a day later.

However, he did not play again until the Geneva Open last month, losing to Spain’s Pablo Andujar in his one and only clay-court match in the past two years.

Expectations of a deep run at Roland Garros have been dampened by Federer, who said he is focusing on building up his form and fitness to peak at next month’s Wimbledon.

Yet he looked in majestic form in the first match of what is only his second appearance on the Paris clay since 2015.

Federer wrapped up the first set in 23 minutes, going on to secure victory in one hour and 33 minutes without facing a break point.

As well as converting five of his 13 break points, the Swiss hit 48 winners and won 80% of first-serve points in an impressive all-round performance.

DISCLAIMER: The Views, Comments, Opinions, Contributions and Statements made by Readers and Contributors on this platform do not necessarily represent the views or policy of Multimedia Group Limited.
Tags:
Daniil Medvedev
Roger Federer
Roland-Garros