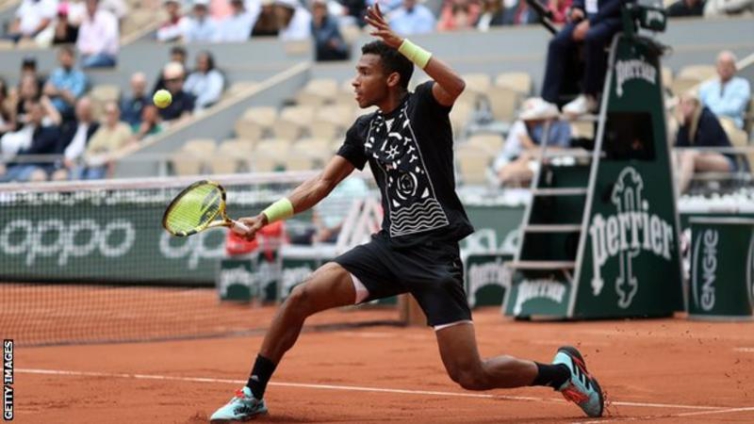 The 21-year-old survived a huge scare on Philippe Chatrier after Peruvian world number 122 Varillas made a dream start on his Grand Slam debut.

He will meet Russian Aslan Karatsev or qualifier Camilo Ugo Carabelli next.

Having reached his first major quarter-final at Wimbledon last summer, the Canadian made the US Open semi-finals before a run to the last eight at the Australian Open in January.

But he was a clear second best early on against Varillas, 26, and appeared on course for a shock early exit in Paris as the Peruvian broke serve twice in both of the opening two sets.

A junior finalist at Roland Garros, Auger-Aliassime rallied in the third set as the momentum shifted emphatically in his favour, and he also dominated the fourth set to level the match.

In a much closer deciding set, it was the world number nine who was able to make the decisive breakthrough in the eighth game, before serving out the match to complete a fine comeback and secure his first French Open main draw win at the third attempt.

DISCLAIMER: The Views, Comments, Opinions, Contributions and Statements made by Readers and Contributors on this platform do not necessarily represent the views or policy of Multimedia Group Limited.
Tags:
Felix Auger-Aliassime
French Open
Juan Pablo Varillas