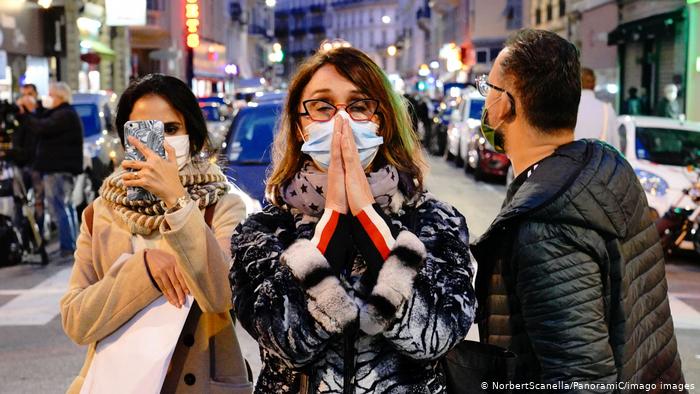 Investigators are questioning a man who is believed to have been in contact with the perpetrator of a deadly attack in Nice. Three people were killed when the suspected knifeman attacked them in a church.

A man has been taken into custody over his alleged ties to the suspected knifeman who killed three people at a church in Nice, media reported on Friday.

French authorities took a 47-year-old man in for questioning on suspicion he may have been in contact with the attacker, according to several news agencies citing judicial sources.

The man was detained late Thursday in the aftermath of the attack in the Notre Dame Basilica at the heart of the Mediterranean city.

The main suspect has been identified as a 21-year-old Tunisian man who was shot by police and hospitalized in life-threatening condition and under police surveillance.

French President Emmanuel Macron has described the killings as an “Islamist terrorist attack,” with the government placing France’s terror alert at its maximum level. Macron will hold an emergency meeting over the attack with his ministers later on Friday.

What do we know about the attacker?

He arrived in France on October 9 and traveled to Nice by train early on Thursday morning before the attack.

Ricard said the 21-year-old man was carrying three knives, two phones and a copy of the Quran.

“We had our son baptized here,” Nice resident Christophe Bremard told DW outside the church where the attack took place. “It’s just too much — terror, the lockdown. I feel lost.”

On the day after the deadly #Nice attack, Christophe Bremard takes a short jogging break at the cathedral. “We had our son baptized here”, he tells me adding that this brought back painful memories of the 2016 attack. “It’s just too much – terror, the lockdown. I feel lost.” pic.twitter.com/gqpeUowAzI

The attack in Nice is the third deadly knife attack in three months that French authorities have attributed to terrorism.

The church killings come after the October 16 killing of history teacher Samuel Paty who was beheaded by an extremist outside his school in a Paris suburb. The attack came after Paty showed students cartoons of the Prophet Muhammad during a lesson on freedom of speech.

France has been the subject of protests and boycotts after Macron pledged to fight “Islamist separatism” and defended the controversial cartoons of Muhammad, saying he won’t renounce them.

Thursday’s attack in Nice also brought up painful memories of the 2016 terror attack when more than 80 people were killed when a Tunisian immigrant drove a truck into crowds celebrating Bastille Day.

DISCLAIMER: The Views, Comments, Opinions, Contributions and Statements made by Readers and Contributors on this platform do not necessarily represent the views or policy of Multimedia Group Limited.
Tags:
France
French Police
Nice attack