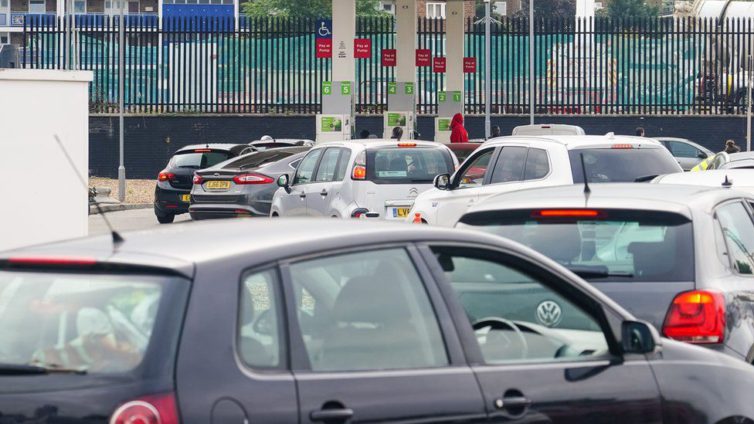 Offering temporary visas to foreign lorry drivers will not be enough to solve supply chain issues, retailers and hauliers have said.

The government’s planned measures would not fix the “ultra-short-term” problems caused by panic buying, the Petrol Retailers Association (PRA) said.

It said some of its members say their forecourts are running dry and others “are partly dry and running out soon”.

Long queues have formed and pumps have closed at some filling stations.

He also told the BBC’s Andrew Marr Show there was “plenty of fuel” and that he had checked with the six refineries and 47 storage centres in the country.

But Brian Madderson, chairman of the PRA, which represents about 5,500 independent petrol stations, told BBC Radio 4’s The World This Weekend that while there was plenty of fuel in the country “it is in the wrong place for the motorist” – in terminals and the refineries.

He said: “Those measures introduced by the government this weekend are not ultra-short-term.

“We might see benefits of them later in the autumn as the drivers come across and start to work. But in the very short-term this panic buying has caused really serious problems.”

He added that “between 50% and 90%” of the PRA’s members had reported their forecourts were running dry and “those that aren’t dry are partly dry and running out soon”.

A shortage of lorry drivers has caused problems for a range of industries in recent months, from supermarkets to fast-food chains.

In recent days, some fuel deliveries have been affected, leading to lengthy queues at some petrol stations.

On Saturday the government announced measures to give temporary visas, lasting until Christmas Eve, to 5,000 lorry drivers and 5,500 poultry workers in a bid to limit disruption in the build-up to Christmas.

‘It’s not something I was expecting’

Kayleigh Robinson, who works in Hampshire as a mental health nurse, said she was left unable to make the 37-mile drive to work on Sunday after she was unable to get diesel at four petrol stations.

“It’s not something I was expecting.

“When you’re working long shifts you don’t really get a chance to see the news that often.”

In the end, her work arranged a taxi to pick her up and take her back home.

Adrienne Kenny, from Cambridge, said she would be unable to go to work as a health, safety and environmental manager for a construction firm on Monday because she needed to drive to Leeds.

She said she had tried three petrol stations on Saturday but “couldn’t get diesel anywhere” before trying another six without success on Sunday, leading her to postpone her meeting.

The 5,000 temporary visas are being given to fuel tankers and food lorry drivers.

Mr Shapps said he did not want to “undercut” British workers by bringing in people from overseas but could not “stand by and watch while queues are forming”.

The transport secretary said there was not a “dramatic shortage in drivers” for the fuel industry, with only “one, two, three hundred drivers” needed for distribution to petrol stations.

Supermarket Asda said it had put a £30 limit on fuel transactions but said that it had good levels of fuel supply.

Sainsbury’s said it was experiencing “very high demand for fuel”, while Morrisons said it was a “rapidly moving situation” and it was working hard to keep its pumps open.

Earlier, Mr Shapps blamed “irresponsible briefing” by the Royal Haulage Association for triggering panic buying, after reports that someone from the group had selectively leaked comments about heavy goods vehicle (HGV) driver shortages at fuel firms.

RHA spokesman Rod McKenzie said it was “absolute nonsense” and that he had not been at the meeting where the issue was raised.

Asked if he would bring in 100,000 foreign drivers, Sir Keir said: “We have to issue enough visas to cover the number of drivers that we need.”

The Liberal Democrats said the transport secretary was “passing the buck” by criticising the Road Haulage Association.

The party’s business, trade and transport spokeswoman, Sarah Olney, added that the government had “repeatedly ignored calls from businesses to address the shortage of drivers”.

Recruitment for additional short-term HGV drivers and poultry workers will begin in October, with the visas valid until Christmas Eve.

Turkey farmer Kate Martin has warned supermarkets could run out of birds before Christmas.

She said there were fewer turkeys being produced because the big processors “know they will not get them processed”.