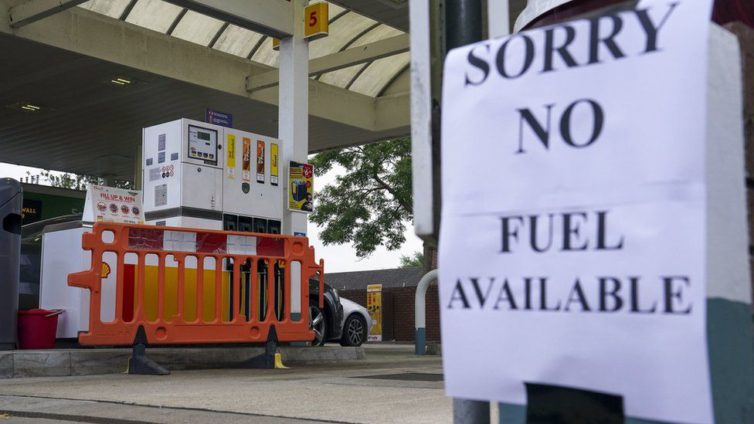 Officials said the move would make it easier for companies to share information and prioritise parts of the country most at need.

It follows days of long queues at the pumps, after fears of disruption to the fuel supply sparked panic buying.

Ministers are also considering deploying the Army to deliver fuel.

The Petrol Retailers Association has warned that as many as two-thirds of its membership of nearly 5,500 independent outlets are out of fuel, with the rest of them “partly dry and running out soon”. The UK has a total of more than 8,000 filling stations.

“While there has always been and continues to be plenty of fuel at refineries and terminals, we are aware that there have been some issues with supply chains.

“This is why we will enact the Downstream Oil Protocol to ensure industry can share vital information and work together more effectively to ensure disruption is minimised.

“We thank HGV drivers and all forecourt staff for their tireless work during this period.”

A shortage of lorry drivers has caused problems for a range of industries in recent months, from supermarkets to fast-food chains.

In recent days, some fuel deliveries were affected, leading to panic buying and lengthy queues at some petrol stations.

In a joint statement from companies including Shell, ExxonMobil, and Greenergy, the industry reiterated that pressures on supply were being caused by “temporary spikes in customer demand – not a national shortage of fuel”.

Mr Madderson also told BBC Radio 4’s Today programme on Monday that filling stations were being restocked, but there were not enough deliveries to restore their normal levels of fuel.

“One of our members yesterday received a tanker at midday and by late afternoon the entire tanker had disappeared into people’s cars,” he said.

On Saturday, the government announced it would offer temporary visas, lasting until Christmas Eve, to 5,000 foreign fuel tanker and food lorry drivers and 5,500 poultry workers in a bid to limit disruption in the build-up to Christmas.

Other measures include sending nearly one million letters to drivers who hold an HGV licence – to encourage them back into the industry – and plans to train 4,000 people to become HGV drivers.

Grant Shapps: “There is plenty of petrol in the country”

Elizabeth de Jong, director of policy for Logistics UK, told Today that it would be “days, possibly a couple of weeks” before the visa applications were open.

She said the industry had wanted more visas to be available and for a longer time, but she said the key issue now was to make them attractive to drivers, which was likely to mean offering good wages.

The UK had lost 72,000 drivers between the second quarter of 2019 and the same period in 2021, Ms de Jong said – partly due to people returning to the EU after Brexit.

At the same time, she said the pandemic had disrupted testing for HGV licences, making it harder to replace the lost drivers.

The shortage of drivers and other workers is also causing concern in the food and retail industry.

The British Retail Consortium said the number of visas being offered was “too small” to make an impact on the disruption expected at Christmas.

What is competition law?

Competition benefits consumers. It encourages firms to innovate and improve their offer to draw customers in. It can mean products are better, often at lower prices.

It also aims to make sure firms compete on a level playing field, as well as protecting them from other businesses acting unfairly.

It stops businesses from making agreements with each other that would distort competition, leaving customers worse off. Agreeing to fix prices for certain goods or services, limiting production to drive prices up, or carving up markets, for example, could all end up breaking competition law.

That risks serious fines, people being banned from running companies, or even jail.

During the pandemic, the government has intervened to exempt certain industries from elements of competition law. At the height of the coronavirus crisis, for example supermarkets were allowed to share more information with each other on stock levels and share depots and delivery vans, to meet customer demand.

The latest move will allow fuel suppliers to share information on which locations are most in need and, according to the Petrol Retailers Association, possibly put fuel into their competitors’ sites – which they would not typically be allowed to do.

Andrew Opie, director of food and sustainability policy at the trade association, told the BBC: “I think we’re going to see less choice, less availability, possibly a shorter shelf life as well, which is really disappointing because this could have been averted.”

She said there were fewer turkeys being produced because the big processors “know they will not get them processed”.

But the boss of supermarket chain Aldi in the UK said he expected “business as usual” at Christmas.

Recruitment for additional short-term HGV drivers and poultry workers will begin in October, with the visas valid until Christmas Eve.