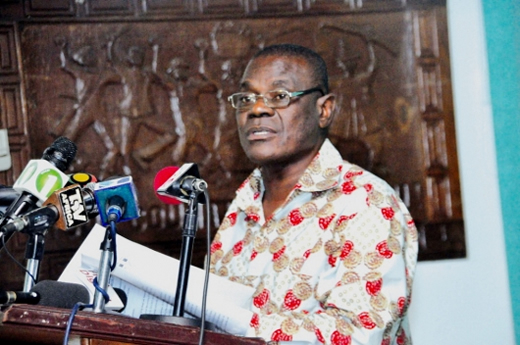 The management Board of the National Service Secretariat on Friday directed management of the Scheme to proceed on leave with immediate effect.

The decision was reached at an emergency board meeting held at the National Secretariat Friday, October 3, 2014.

Below is the full statement signed by Board Chair, Mrs. Gifty Mahama:

The Governing Board of the Ghana National Service Scheme has directed the Executive Director of the Scheme, ALHAJI ALHASSAN IMORO and his two Deputies, MR. MICHAEL KOMBOR, in charge of Finance & Administration and MADAM SOPHIA KAREN AKUAKO, in charge of Operations.

The following Headquarters Staff have also been directed to step aside. They are:

MR. FIIFI ASUBONTENG, the Director of IT

Furthermore, the Greater Accra Regional Director, MR. SETH ASIEDU, and ALL other officers of the Scheme whose names have so far been cited in the on-going investigations are to step aside.

The above Decisions were taken at an Emergency Board Meeting held on Friday, 3rd October, 2014.

Meanwhile the Governing Board, headed by its Chairman, has temporary taken over management of the Scheme until further notice.

These actions by the Board is informed by its strong desire and determination to pave way for the on-going investigations into the operations of the Scheme and to ensure that all persons who may be found culpable are appropriately sanctioned according to law.

The Board wishes to assure the general public that since its inauguration on 9th December, 2013, it has, and will continue, to pursue the path of public accountability and elimination of all corrupt practices in the operations of the Scheme.