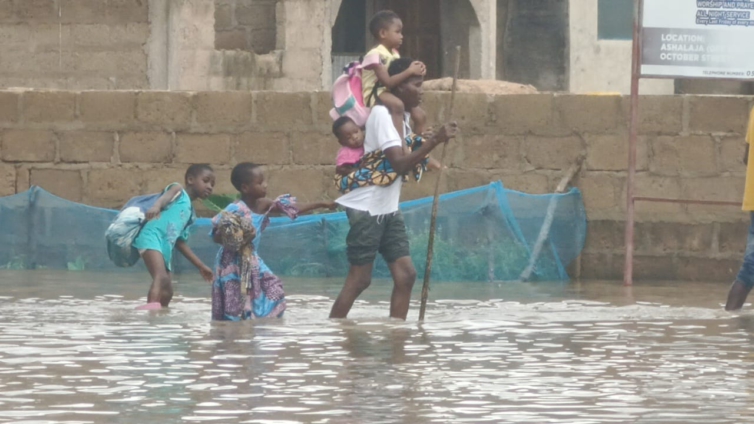 Hundreds of flood victims in the Ga South municipality have made a passionate appeal to government for food and basic essentials as their houses remain submerged in flood waters.

According to them, they have been starving after losing their source of livelihood and properties to the flood that has displaced more than one thousand people in the Tetegu, Ashalaja, Weija and Oblogo areas.

For three days, they have remained out of their homes, with some killing their livestock and any animal they lay their hands on to survive.

They told JoyNews reporter Maxwell Agbagba that more than 72 hours after they were forced from their homes by the flood, they are yet to receive relief items from the National Disaster Management Organisation (NADMO).

They are pleading for mattresses, beddings, and food.

“Today makes it the third day and we have not received anything, we don’t have anywhere to sleep. There is nothing to do.

“We are just begging and pleading with the government to give us food, mattresses, mosquito nets, water and other things that can sustain us in these difficult times,” they pleaded.

Meanwhile, some of the victims – including children – are relying on family and friends for a sleeping place. Others are also sleeping in makeshift structures.

Those in some affected areas were compelled to sleep in hotel chairs and on the floor overnight as hotels in some of the affected communities were overbooked.

A room that usually takes only two people had to accommodate a family of seven.

“For yesternight, we had to turn down more than 20 people because [the flood’s effect] was outrageous… people coming in, running in. I think some people even at a point slept here; yes, some slept outside because there were no rooms available.

“They come in the name of ‘I will buy a drink’. They brought the drink but realising the time [they stayed]. I had to leave my vehicle home because it was pointless driving it out and it’s expensive living in the hotel,” a resident shared.

DISCLAIMER: The Views, Comments, Opinions, Contributions and Statements made by Readers and Contributors on this platform do not necessarily represent the views or policy of Multimedia Group Limited.
Tags:
Ashalaja flood
Flood victims
Floods
Ga South Municipality
Tetegu
Weija