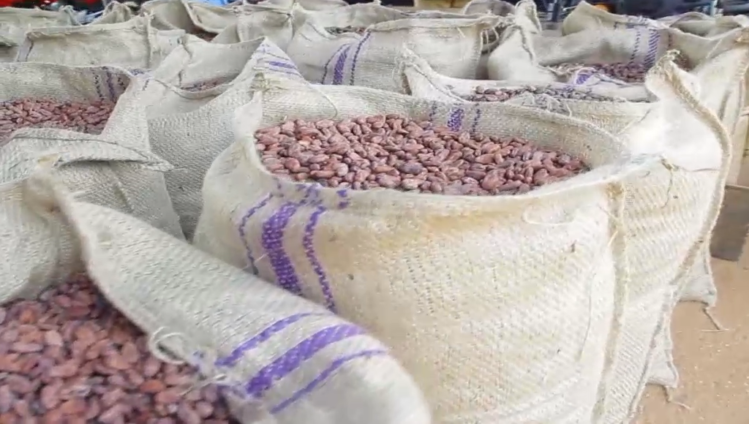 The Ghana Cocoa Board (COCOBOD) has expressed concern about the speed at which activities of illegal miners are not only causing devastation in forest areas but beginning to impact adversely on cocoa production figures.

If the current trajectory of devastation by illegal miners is not overturned, it could land a devastative blow with long-term bleak future for the cocoa sector.

The illegal miners are brazenly taking their activities to huge investments by COCOBOD in cocoa-growing areas across the country.

A visibly pained Public Affairs Manager at COCOBOD, Fiifi Boafo recounting one of many worrying encounters with the illegal miners in an interview with JoyNews Latif Iddrisu said, ‘’Some of them actually use other coercive means of taking over the cocoa farms. Some go to the traditional authorities who force usually the migrant farmers to say I gave you the land so I’m taking over my land. And then they give these lands to the illegal miners. Sometimes they (illegal miners) actually start digging the farm before the owners realize,’’ Mr. Boafo lamented.

‘’In a very worrying trend, some cocoa farms that were diseased, COCOBOD had to sponsor to get these farms to start afresh. Just when the farms started seeing some flowers, the illegal miners have gone to clear everything. That is the extent of danger these illegal mining poses to our industry,” he added.

Compared to the posturing and pronouncements of President Akufo-Addo towards the illegality back in 2017, swiftly followed by the deployment of Operation Vanguard to the mining regions of the country, the fight against the illegal mining in recent years appears to have run out of steam. Eco-friendly organizations and the general population have had cause to call on government to take action to prevent further damage to the environment.

If the political class sits on the fence to allow illegal mining to continue unchecked, the danger it will have on the cocoa industry will go beyond the households of individual cocoa farmers.

DISCLAIMER: The Views, Comments, Opinions, Contributions and Statements made by Readers and Contributors on this platform do not necessarily represent the views or policy of Multimedia Group Limited.
Tags:
Cocoa Production
COCOBOD
Galamsey