‘Galamsey’ poses an existential threat to our future – Akufo-Addo 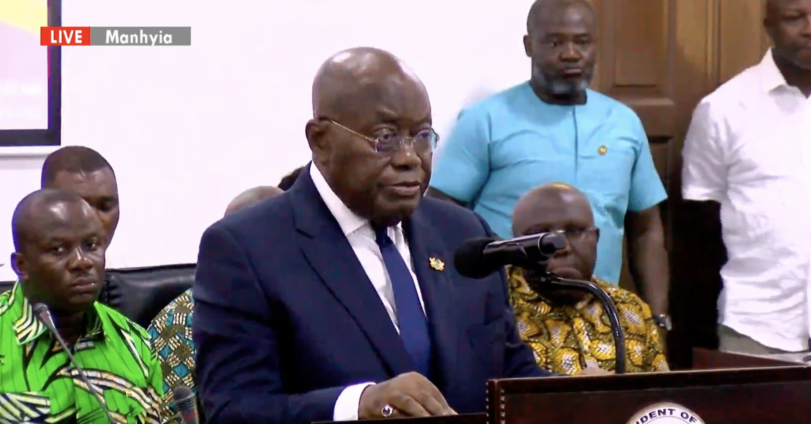 President Akufo-Addo says the activities of illegal mining, popularly known as ‘galamsey’ pose an existential threat to the country.

The President said the menace is a common enemy all Ghanaians must help defeat.

“The progress of our country depends on all of us, all citizens of Ghana, all fellow Ghanaians pulling together to defeat this existential threat to our future,” he said.

He made the comments when he addressed the National House of Chiefs on the issue on Wednesday.

At the same meeting, President Akufo-Addo urged the chiefs to take partisanship out of the ‘galamsey’ fight.

According to him, the fight is a national battle and must precede all other interests which he stressed is the only way the fight can be won.

“There are many things I intend to beg of you during the close door session of our meeting, but one of the most significant which I have to state now is to seek your assistance to take partisan political interest out of the fight against ‘galamsey’.

“It can only succeed if it’s a truly national battle which no one seeks to exploit for political gains as we saw in the last election,” he urged.

Meanwhile, he intimated that neither he nor his government is against mining.

However, what he opposes is irresponsible mining.

“I have said it before. We are not against mining but we cannot accept mining in a manner that risks destroying our country.”

DISCLAIMER: The Views, Comments, Opinions, Contributions and Statements made by Readers and Contributors on this platform do not necessarily represent the views or policy of Multimedia Group Limited.
Tags:
Akufo-Addo
Galamsey Fight
National House of Chiefs