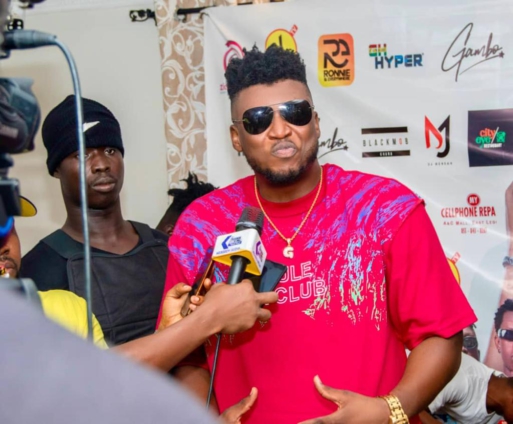 A door of opportunities has been opened for the youth of Ashongman, through rapper, Gambo who seeks to give back to society and contribute his quota to the development of Ghana.

Over the past four years, Gambo, the ‘Girls Girls’ crooner, has been actively contributing to the development of Ashongman, a suburb of Accra.

But the ‘Drip’ hitmaker and reigning Vodafone Ghana Unsung Artist of the Year, Gambo, has decided to take things a notch higher as far as supporting human resource development in Ashongman is concerned, and he has officially launched his upcoming concerts that will give young people in Ashongman the platform to showcase their talents.

Gambo is hosting two big concerts in December this year. The first concert dubbed: ‘Ashongman to the world’ is taking place on December 2, 2022, with the second concert scheduled to take place at Old Tafo in Kumasi on December 16.

The ‘Gambo & Friends’ Concert’ is scheduled to kick off at 7 pm on December 2 at the Old Ashongman School Park. Gambo will then headline another concert at Old Tafo, Kumasi, in the Ashanti Region on December 16, 2022, beginning 7 pm as well.

The concerts, aimed at promoting youth entrepreneurship and talent development for a better life, are being organised by Gambo’s record label, BlackMob. Gambo, the reigning Vodafone Ghana Unsung Artist of the Year will be performing several of his hit songs including ‘Boys Aye Wild’, ‘Drip’, ‘Settle’ and his recently released track ‘We Outside’.

Addressing several journalists at the City Eye Restaurant in Ashongman on Saturday, November 19, 2022, about the upcoming concerts and what they will mean for the unearthing of young talents in Ashongman,  Gambo expressed his profound love for the street and his desire to be a blessing to his generation, especially the youth of Ashongman.

He recounted his several supports to the youth in the area over the years, including promoting soccer development in Ashongman  expressing his commitment to continually supporting the people of Ashongman who are so dear to him.

He observed the need to support the development of young talents, saying “when you spread love, you get blessings.”

He says a lot of upcoming artists will perform at the ‘Ashongman To The World’ Concert, saying giving young artists the platform to showcase their talents is the main goal of the whole concert.

Gambo, the ‘Settle’ hitmaker said some of the youth of Ashongman are good rappers, dancers and comedians “but they don’t have a stage” to showcase their talents, saying “I am glad that I am able to provide the stage for the cause.”

Several youth of Ashongman, some of them young artists managers, turned filled the City Eye Restaurant to express their love for Gambo and to urge him to continue being a blessing to them. They expressed the belief such concerts will give them the needed exposure.

DISCLAIMER: The Views, Comments, Opinions, Contributions and Statements made by Readers and Contributors on this platform do not necessarily represent the views or policy of Multimedia Group Limited.
Tags:
Ashongman
Gambo