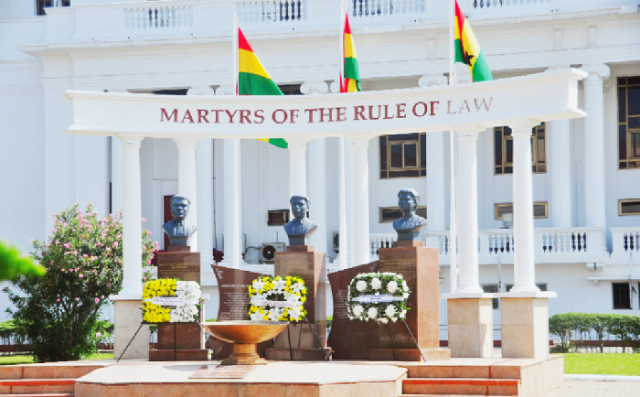 The Ghana Bar Association in collaboration with the Judiciary on Sunday, held a 37th-anniversary remembrance service at the Kaneshie Presbyterian Church in Accra for the three murdered justices of the High Court of Justice.

Mr Anthony Forson, the President of the Ghana Bar Association who read a reference document on the plight of the late Justices and retired Army Officer titled, “Lest We Forget” said they were brutally and savagely murdered on the night of their abduction at the Bundase Military Range in the Accra Plains.

“The bodies of these precious Ghanaians had been soaked with petrol and set on fire. Divine intervention, through a heavy downpour that night, quenched the burning bodies and when discovered, the charred bodies had deteriorated into a state of decomposition,” he said.

He said a Special Investigation Board” formed by the then Provisional National Defence Council made findings that led to the prosecution and sentencing of death of the accused persons who were found guilty.

Mr Forson said for the past 36 years, the Bar and Bench had mourned the death of these martyrs of the rule of law.

“In response to the call for reconciliation by the National Reconciliation Commission and the biblical injunction, that we should forgive those who trespass against us, we have forgiven the wrongdoers for their cowardly and evil deeds,” he added.

On the issue of the kidnapping of the two Canadian women, he commended the Security Services for apprehending the suspected kidnappers.

However, he said: “The country waits with bated breath to hear similar good news relating to the three residents of Takoradi namely Priscilla Bentum, Ruth Quayson and Mantebea Koranchie who were kidnapped variously in August and December 2018.”

Reverend Professor Joseph Obiri Yeboah Mante, the Moderator of the Presbyterian Church delivering a sermon on “God and Freedom”, said independence is meaningless unless it was anchored by God.

He advised people especially those with reputable social statuses and the highly learned to be humble in their dealings with man, saying: “I pray to God that, the more you learn the more you become humble.”

He called on government to train up students in a way that they could become responsible for their lives after completing tertiary education.

“Ghanaians need to arise, students arise to study well and workers, arise to work harder if we want this nation to progress,” he said.

Rev. Prof. Mante disclosed that a research conducted showed that one out of every three Africans would like to leave Africa to stay in the Western world, saying, that was serious and conflicted with the dreams Dr Kwame Nkrumah had for the country.

He explained that all was because Africa and Ghana for that matter still struggled with structural and functional problems of health, education, potable water, and good roads etc.

“Yet, people are using the State’s money to fight useless political battles. Let’s not allow anyone to deceive us,” he said.

Bad deeds including greed, stealing and robbery he said, had befallen the country at every field including work places and Christian ministries and called on all to read the Bible verse: (Proverbs 14: 34) to be encouraged to adopt positive attitudes.

The Service was graced by Dr Mahamoudu Bawumia, the Vice President; Justice Sophia Akuffo, the Chief Justice; Justice Gloria Akuffo, the Attorney-General; other justices of the Supreme and High Courts, members of the Ghana Bar Association and some government officials.

DISCLAIMER: The Views, Comments, Opinions, Contributions and Statements made by Readers and Contributors on this platform do not necessarily represent the views or policy of Multimedia Group Limited.
Tags:
GBA
Judiciary
Martyrs of the rule of law