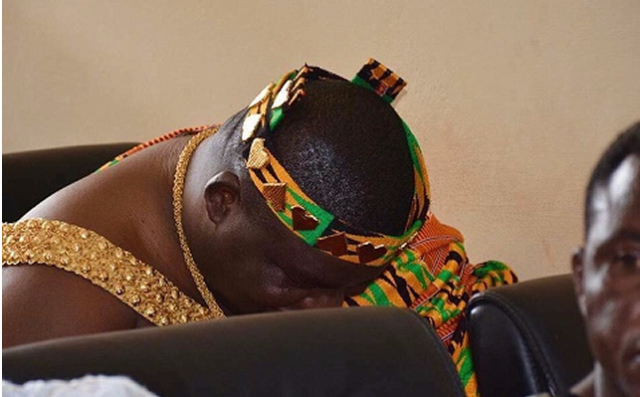 He vowed to willingly step down if the incumbent president John Mahama loses the election.

So confident was Nii Ayi Bonte Chief of Gbese Traditional Area that the president was going to retain power that he put his own power on the line for the president.

But the incumbent suffered a shattering defeat in the hands of the opposition leader Nana Akufo-Addo and pressure is mounting on the Ga chief to honour his promise.

He has been quiet after defeat, holding on to his seat, praying that the people to whom he made the promise will forget about his promise to abdicate the seat.

Nii Ayi Bonte was part of the delegation of chiefs who met the president-elect Nana Akufo-Addo during a meeting with the Ga Traditional Council.

Efforts by the media to get him to speak on the day of the meeting failed. With his golden crown firmly placed on his head, the chief chose an obscure place to sit at the back.

More than two weeks after Nana Akufo-Addo was elected, Nii Ayi Bonte is yet to honour his promise.

The people have not forgotten his promise. They want him out. The media started a campaign to get him out. Social media led it and now the king makers at Gbese have joined with a seven-day ultimatum for Nii Ayi Bonte to step down or he will be forced to do so.

Spokesperson of the Gbese Kingmakers Nuumo Okai Keteku told media men at a press conference, Wednesday, the conduct of their chief shameful, a violation of the constitution and the code of royal ethics.

"His conduct amounts to an invocation of a traditional oath," he pointed out.

He said once the chief has breached the constitution and his code, the only thing left for him to do is step down and has seven days to do so.

A former president of the Ga-Adangbe Council KB Asante agrees with the action taken by the kingmakers.

He told Joy News if the chief indeed made that promise then he must go or be forced to go.

He reiterated the fact that chiefs must not take active part in politics.

With his loud silence and stranglehold on the throne questions have been raised about whether Nii Ayi Bonte can be made to abdicate the seat.

KB Asante said the Kingmakers have the power to enthrone a chief and dethrone him if his conduct offends the traditions of the community.

The diplomat cited examples in which chiefs were made to run away without their sandals, an action that connotes a vote of no confidence.

Before his ascension onto the Gbese throne, Nii Ayi Bonte, known in private life as Thommy Okine was a football enthusiast, administrator and CEO of Accra Hearts of Oak.