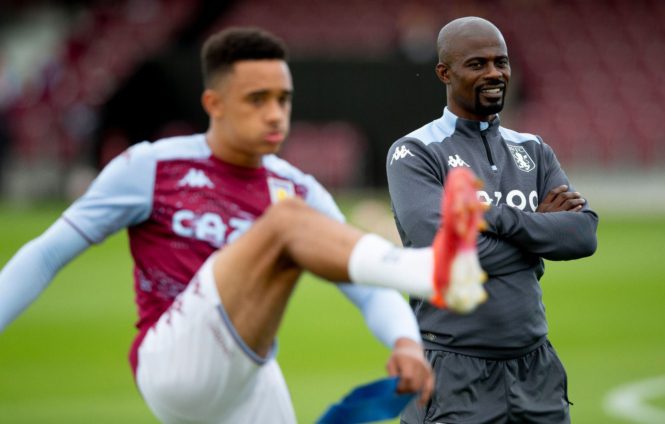 George Boateng’s Aston Villa U23s have completed the group stage of the Papa John’s Trophy, topping their group after the Ghanaian’s side beat MK Dons 4-2 in the final group game.

Aston Villa U23s were drafted in a group with the first teams of Wycombe Wanderers, Burton Albion and MK Dons – EFL League One clubs.

The 4-2 score in the final group game captured a picture of Aston Villa’s U23s journey so far, as they successfully meandered their way through tough opposition.

Prior to the MK Dons encounter, A comeback inspired by a Cameron Archer hat-trick, was what Boateng’s Aston Villa U23s required to overcome Burton Albion and put themselves top of the group.

Former Chelsea striker, Jimmy Floyd Hasselbaink was in the dugout for Albion as Boateng engineered his team’s comeback from 2 goals down.

The 46-year-old, who was tipped to take over from Akonnor after his dismissal as Black Stars manager, edged MK Dons in the final game of the group.

Archer scored twice with Keinan Davis and Aaron Ramsey chipped in with goals as Boateng’s side rallied to a victory.

Aston Villa’s U23s, who played all games of the group stage away from home, have now qualified to the knockout stages of the competition.

Boateng was appointed as head coach of the Aston Villa U23 side in 2020 and has since promoted about nine players from the U23 to the first team of Villa. One of the players he promoted in CameronArcher scored a hat trick in the team’s recent triumph in the EFL Cup against Burton Albion.