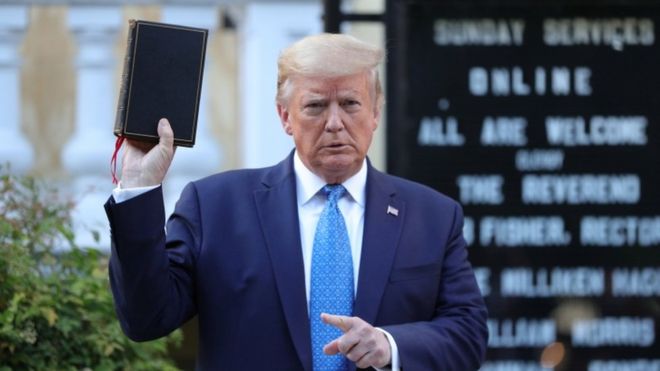 President Donald Trump has sparked controversy with his photo shoot

Last night he held a Bible in front of St John’s Episcopal Church, just across the road from the White House. Today, he’ll visit the Shrine to St John Paul II, also in Washington DC.

But US President Donald Trump’s signalling of religious affiliation has not been welcomed by a range of clerics as the nation struggles to manage the twin challenges of a pandemic and widespread political protest.

The Episcopal Bishop of Washington, the Right Reverend Mariann Budde, said: “The president just used a Bible, the most sacred text of the Judeo-Christian tradition, and one of the churches of my diocese, without permission, as a backdrop for a message antithetical to the teachings of Jesus.”

James Martin, a Jesuit priest and consultant to the Vatican’s communications department, tweeted: “Let me be clear. This is revolting. The Bible is not a prop. A church is not a photo op. Religion is not a political tool. God is not your plaything.”

Let me be clear. This is revolting. The Bible is not a prop. A church is not a photo op. Religion is not a political tool. God is not your plaything. pic.twitter.com/RZwPeqrwoZ

Rabbi Jack Moline, President of the Interfaith Alliance, said: “Seeing President Trump standing in front of St John’s Episcopal Church while holding a Bible in response to calls for racial justice – right after using military force to clear peaceful protesters – is one of the most flagrant misuses of religion that I have ever seen.”

President Trump does not belong to a particular congregation, only occasionally attends a service and has said many times that he does not like to ask God for forgiveness.

But while he may not consider church essential to his personal life, it may yet hold the keys to his political future.

In 2016, Mr Trump won 81% of white evangelical votes and exit polls found that white Catholics supported him over Hillary Clinton by 60% to 37%.

Mr Trump’s status, as the champion of evangelical and conservative voters, can seem peculiar given his use of divisive rhetoric, his three marriages, accusations of sexual assault by dozens of women, the hush-money paid to a pornographic film actress, and the record of false statements made during his presidency – more than 18,000 according to the Poynter Institute’s Politifact website.

But he has sealed a powerful bond with religious voters by embracing their political priorities and appointing two Supreme Court justices – Brett Kavanaugh and Neil Gorsuch – and federal judges with their support.

This may explain why – though an irregular congregant himself – the president has repeatedly demanded the reopening of churches, saying, on 22 May, “If they don’t do it, I will override the governors.”

Religious conservatives appear to be the most solid core of Mr Trump’s voter base, despite political unrest and the vast number of deaths from Covid-19.

According to the latest Pew Research Poll, 77% of white evangelical Protestants say he’s doing a good job in handling the pandemic – down just 4 percentage points from three weeks ago.

But while one voting bloc remains faithful, the country at large is deeply divided. According to analysis by the website FiveThirtyEight, which collates all polling data, 43% of Americans agree with the president’s handling of the coronavirus pandemic, while 53.4% disapprove.

Several religious leaders are hoping that Trump’s visit to the shrine may encourage him to reflect on the words of then Pope John Paul II, delivered to the United Nations in 1995.

“The answer to the fear which darkens human existence at the end of the 20th Century,” he said, “is the common effort to build the civilization of love.”