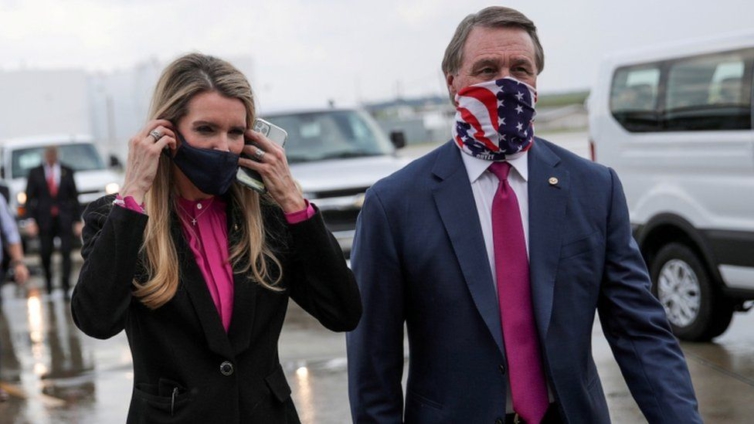 Elections in the US state of Georgia that will decide control of the Senate are too close to call as polling ends.

The BBC’s US partner CBS News rates both races as toss-ups. Results are due within hours, but if it remains close a final outcome could take days.

US President-elect Joe Biden’s Democrats need to win both seats to gain full control of Congress.

The Republican party of outgoing President Donald Trump needs only to win one in order to retain the Senate.

None of the candidates reached the 50% needed to win outright in the elections in November, forcing Tuesday’s runoff elections under Georgia’s election rules.

What’s at stake in Georgia?

The vote will decide the balance of power in the Senate.

The Republicans currently hold 52 of the 100 seats. If both Democrats win Tuesday’s elections, the Senate will be evenly split, allowing incoming Democratic Vice-President Kamala Harris the tie-breaking vote.

This would be crucial for pushing through Mr Biden’s agenda, including on key issues such as healthcare and environmental regulations – policy areas strongly contended by Republicans.

The Senate also has the power to approve or reject Mr Biden’s nominees for cabinet and judicial posts.

If Mr Ossoff and Mr Warnock both win, it would bring the White House, Senate and the House of Representatives under Democratic control for the first time since President Barack Obama’s election in 2008.

According to CBS News, total turnout is estimated just over four million. About 80% of ballots were expected to be tallied by midnight local time, but it is not clear if they will keep counting overnight.

Voting ended at 19:00 local time (midnight GMT), although all those still queuing outside polling stations at that time were being allowed to vote.

Democrats are hoping for a large turnout and have been buoyed by the fact that more than three million Georgians have already cast their ballots – nearly 40% of the state’s registered voters. Early voting was a key benefit for Mr Biden in the presidential election.

David Perdue has been self-isolating since coming into contact with someone with coronavirus, while his Republican fellow candidate Ms Loeffler tweeted images of herself and supporters waving placards on polling day.

Both Democratic candidates were also out canvassing for final votes on Tuesday.

The Democrats were looking to turn out supporters in major urban areas, particularly the suburbs of Atlanta. The issue of long lines of voters could be more of a problem for them.

For the Republicans, getting out voters on the day was even more crucial, and they will be looking to the stronghold of north Georgia, as well as rural areas and smaller towns.

Mr Perdue nearly won first time out against Mr Ossoff in November, falling just short of the needed majority with 49.7%.

The other seat had more candidates, with Democrat Mr Warnock recording 32.9% to Ms Loeffler’s 25.9%.

A Democrat has not won a Senate race in Georgia in 20 years but the party will be boosted by Mr Biden’s presidential election win over Mr Trump there. Mr Biden’s margin of victory was about 12,000 votes among five million cast.

How important is the black vote for the Democrats?

Georgia’s black community is more than double America’s national proportion, making up a third of the population.

Across America, nine in 10 black voters supported Mr Biden in the presidential election, according to a survey of more than 110,000 voters for the Associated Press.

In Georgia, voting rights activists like former gubernatorial candidate Stacey Abrams have played a major part in driving up black support for the Democrats and delivering the state for Mr Biden in November.

If elected, the Baptist preacher would be the first black person to represent the state in the US Senate, as well as just the 11th black senator in American history.

What are voters saying?

Members of the BBC’s voter panel in Georgia have told us what motivated them to vote.

Steven Burkhart, 53, an independent voter from Atlanta who owns a small business, says that “the idea of the Democrats controlling the government is very frightening to me”.

He disagrees with the Democrats’ police reform policies and says the party has a “mentality” of wealth redistribution – “and I just don’t think that’s very conducive to a good economy”.

Robert Patillo, 36, a Democrat from Atlanta who cast his absentee ballot on the first day of voting, says that “the Democrats are running on a platform of reality”.

“If you look at campaign ads, the Republican candidates are saying we need to save Western civilisation and fight back against socialism, communism and Marxism, but they never talk about real issues that impact Georgians.”

“Neither of them has a plan to address the coronavirus or an economic platform that would help the average person.”

The BBC’s Cody Godwin has been speaking to voters in Cherokee County, outside of Atlanta, and says voting queues have stretched around the block but appear to be moving quickly.

This is a quick look at the voting line outside my former elementary school in Cherokee County, Georgia. It’s a cold day in Georgia and it’s taking about 40 minutes to get inside – though the line is longer now than when the folks I spoke to joined. pic.twitter.com/oScsazVVeN

It’s just over two weeks until Joe Biden’s inauguration, but the first real test of his presidency is on Tuesday.

If Democrats pick up the two seats and forge a 50-50 tie in the upper chamber, it’s still far from certain that Biden will be able to enact the kind of sweeping legislation on the environment, healthcare and the economy that he proposed during his successful presidential campaign.

The narrowness of the margin will ensure that any laws will have to be supported by centrists in his party, like Joe Manchin of West Virginia and Arizona’s two senators.

It will, however, give the new president a fighting chance at legislative accomplishments – and make it significantly easier for him to appoint the administration officials and federal judges of his choice.

If the Republicans hold on, then Democratic hopes will rest on the whims of Majority Leader Mitch McConnell and a handful of Republican moderates.

On Wednesday, more political drama is expected in Washington DC, as lawmakers gather in a special joint session to ratify the results of November’s presidential election.

The typically procedural affair – which will affirm Mr Biden’s victory – has become unusually contentious, with at least a dozen Republican senators vowing to challenge the results.

The group, led by Senator Ted Cruz and including Ms Loeffler, wants a 10-day delay to audit unsubstantiated claims of election fraud. The move is all but certain to fail as most senators are expected to endorse the results that have already been certified by US states.

Vice-President Mike Pence is set to preside over the session in his role as president of the Senate. He has come under pressure this week from Mr Trump to reject the certification.

Supporters of Mr Trump are demonstrating in the capital, disputing the presidential election. Mr Trump is expected to address protest in the nation’s capital on Wednesday. The mayor has asked for the National Guard to be deployed in the city amid fears of unrest.

Mr Biden, a Democrat, is due to be inaugurated as president on 20 January.

President Trump has refused to concede the election to Mr Biden, who won 306 votes to Mr Trump’s 232 in the US electoral college, which confirms the president.

DISCLAIMER: The Views, Comments, Opinions, Contributions and Statements made by Readers and Contributors on this platform do not necessarily represent the views or policy of Multimedia Group Limited.
Tags:
Donald Trump
Georgia Senate election
Joe Biden
US elections 2020