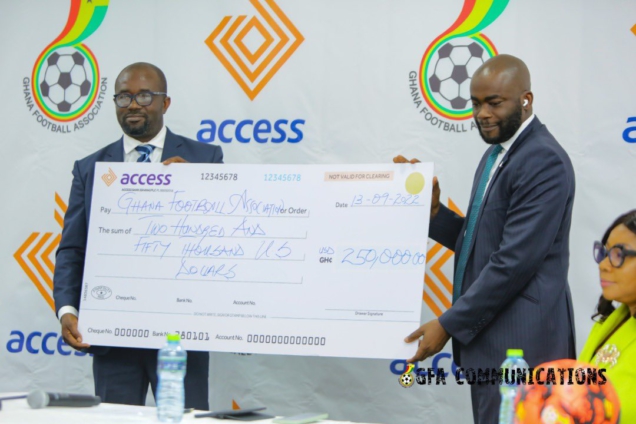 The Ghana Football Association has officially announced Access Bank as an official partner of the Division One League for the next season.

The announcement was made on Tuesday, September 13, 2022 at the GFA headquarters in Accra. In attendance was President Kurt Edwin Simeon-Okraku, General Secretary Prosper Harrison Addo, Members of the Division One League Board led by Vice Chairman Ken Thompson, Gideon Ofosu, Eugene Nobel and Tophic Kadri Seinu.

Others included Chief Executive Officers and representatives of the Division One League Clubs.

“When I took office as GFA President, I told my General Secretary that we have been doing business with a lot of banks but we get nothing in return’’ he said.

“Hence, any bank that wants to sustain their business with us must be ready to invest in the products of the GFA.

“Access Bank are the only bank that accepted that directive and are investing Two Hundred and Fifty Thousand ($250,000) into Ghana football for a one year period.

“They will be the official banking partner of the Ghana Football Association.

“Access Bank will offer Division One League clubs overdrafts and loan facilities as part of their sponsorship package,” he added.

DISCLAIMER: The Views, Comments, Opinions, Contributions and Statements made by Readers and Contributors on this platform do not necessarily represent the views or policy of Multimedia Group Limited.
Tags:
Access Bank
Division One League
GFA