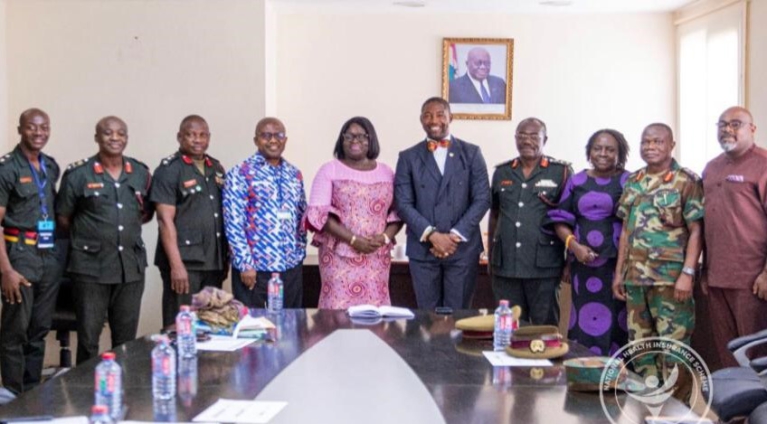 A delegation from the Ghana Armed Forces Medical Services has paid a courtesy call on the Chief Executive Officer (CEO) of the National Health Insurance Authority (NHIA), Dr. Bernard Okoe Boye, and his Executive Management team.

The familiarisation visit, among other reasons, was meant to officially introduce the top-hierarchy of the GAF Medical Services to the new NHIA Chief Execuitve.

Delivering an address to the delegation, Dr. Okoe Boye urged the 37 Military Hospital to integrate its systems with that of the National Health Insurance Scheme (NHIS).

He stressed that it would help the Authority’s efforts to make the vetting and processing of claims watertight to limit leakages.

“It is our desire to scale up the use of electronic claims (e-claims) among all our service providers, this year,” he said.

The former Ledzokuku Member of Parliament underscored the need to partner all stakeholders to find innovative solutions to address the persistent challenges of irregular flow of funds into the Insurance Fund.

He hoped that a more predictable way of receiving inflows from the government will be welcome to reduce operational challenges for service providers.

On his part, Director General Medical Services of the Ghana Armed Forces, Brigadier-General Ernest Saka thanked Management of NHIS for what he described as a great working relationship they have had in the past.

He prayed for a better partnership going forward.

Meanwhile, he noted that NHIS funds form a significant part of the Internally Generated Funds (IGF) used to run the 37 Military Hospital.

Owing to this, he said a timely receipt of the funds would go a long way to positively impact health service delivery for military personnel and their dependents, as well as members of the public who visit the facility.

He seized the occasion to introduce Brigadier-General Raymond Ewusi, who would take over as the Director-General of Medical Services.