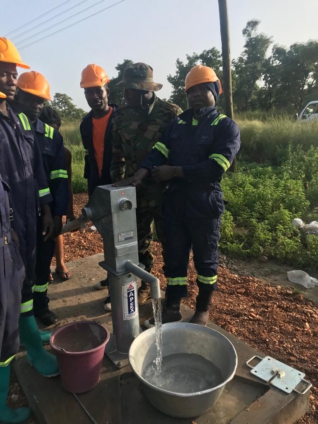 The Ghana Armed Forces (GAF) is currently undertaking the construction of social intervention projects in some deprived communities in the northern parts of the country.

The projects which began three months ago, are under the auspices of the Ministry of National Security. They seek to improve the socio-economic needs of the people in these areas and address potential human security challenges.

The 48 Engineer Regiment of GAF is in charge of the project which is under the codename ‘OPERATION ROADSTAR’ in the Upper East and Upper West Regions.

“Currently there are ongoing works in the construction of the Box Culverts in the Sissala-Kasana Districts and the drilling of Forty-two (42) boreholes in the Pusiga, Binduri, Bawku, Sissala West, Nadowli-Kaleo and Wa-West Districts. Also, the substructure of the construction of a 24- Seater Lavatory Facility at the Zuarungu Senior High School is completed while the block laying for the superstructure is ongoing,” GAF said in a statement on October 24.

According to GAF, the projects are under Phase One of the Social Intervention Projects initiated by the Ministry of National Security which the 48 Engineer Regiment of the Ghana Armed Forces mobilised engineer resources to complete.

“So far, about 75 percent of the entire works for Phase One of the projects has been completed and GAF is working effortlessly to complete these projects on schedule before the end of the year,” the statement added.

DISCLAIMER: The Views, Comments, Opinions, Contributions and Statements made by Readers and Contributors on this platform do not necessarily represent the views or policy of Multimedia Group Limited.
Tags:
Ghana Armed Forces
Northern region
social intervention