Ghana can learn from US election – Mahama 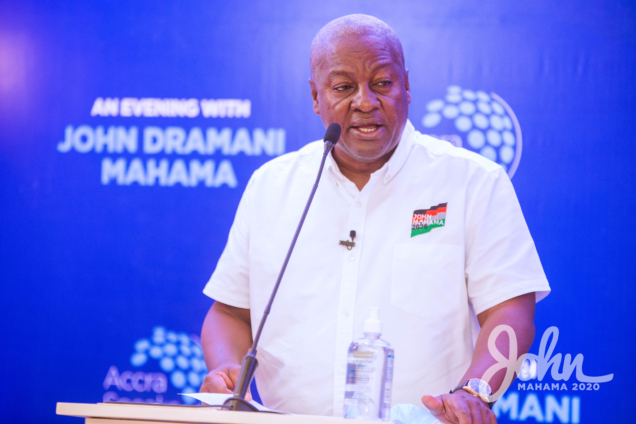 The presidential candidate of the National Democratic Congress (NDC), John Mahama, says Ghana can learn a lot of lessons from the just-ended elections of the United States of America, including the independence of state institutions.

Speaking in an interview with reporters, he said despite the fact that President Donald Trump at a point ordered for the complete halt of the counting of the ballots, the institutions were independent and assertive.

“And that is the kind of predictability and strengthening of institutions we seek in Ghana. That institutions are able to work without political influence and I wonder what would have happened if the same was happening in Ghana. But we will see how things go”, Mr Mahama said.

He, therefore, called for a collective effort to strengthen institutions like the Electoral Commission, the judiciary, the legislature and those institutions that anchor Ghana’s democracy to offer the right service and mandate that the people have given them, without any partisan consideration.

Mr Mahama said another lesson that can be learnt from the US elections is that when a leader becomes divisive, pursues his personal and family interest and abandons his allies, a time would come when the people will rise up and make a decision that protects their interest just like how it happened in the US.

He was very optimistic that the NDC will win the December 7, 2020, general elections to be able to work with the US president-elect, Joe Biden.

“When I talk about working together, Ghana, of course, we live in a global village and the US as the most powerful country in the world has connections with what we do here in Ghana.

“When I was the president we successfully negotiated the Millennium Challenge account. Unfortunately, this government messed up with the PDS”, Mr Mahama said.

He said the next NDC government will try to negotiate with the Millennium Challenge Corporation to get the money back to invest in the energy sector as well as engage in other multi-lateral cooperation and climate change issues.

Mr Mahama, who was elated that the US has elected its first female Vice President, was hopeful that Ghanaian voters will do the same thing in the December general elections, by electing him and his running mate, Prof. Naana Jane Opoku-Agyemang.

DISCLAIMER: The Views, Comments, Opinions, Contributions and Statements made by Readers and Contributors on this platform do not necessarily represent the views or policy of Multimedia Group Limited.
Tags:
John Mahama
US elections 2020