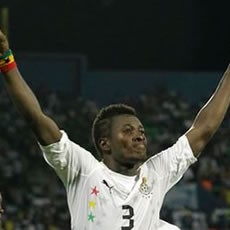 It's time to look at the men in football who have been giving goalkeepers the hardest time.
In 2012, the race for the most prolific goalscorer was fought between La Liga rivals Cristiano Ronaldo and Leo Messi, but in 2013, the duopoly has been broken.
No African footballer has been as prolific as Asamoah Gyan in 2013.
Gyan netted 40 times for both club and country to become the sixth highest topscorer in the year 2013.
The Ghanaian goal-poacher just keeps getting better and better and his exploits for Al Ain fetched him topscoring rights for a second successive season in the UAE Pro League, while he was also awarded for scoring the most goals in the entire region of Arabia.
Only Cristiano Ronaldo (69), Zlatan Ibrahimovic (47), Lionel Messi (45), Luis Suárez (42) and Edinson Cavani (41) have scored more goals than the Ghana striker in 2013.
Gyan has been more prolific this year than World class finishers Robert Lewandowski (39), Alvaro Negredo (38), Jonathan Soriano (37), Diego Costa (36), Carlos Saucedo (35) and Yilmaz Burak with goals.
Gyan also enjoyed an incredible year for Ghana, celebrating a decade in the Black Stars' shirt with a starring role in the team's successful Brazil 2014 qualification quest, scoring six goals which shot him further up Ghana's table of all-time finishers.
Just Last week, Gyan became the first ever player to score 70 goals in two-and-half seasons in the United Arab Emirates top-flight after scoring for Al Ain in their 1-1 home draw with Al Sharjah.
Below is the list of top ten scorers in 2013
1.Cristiano Ronaldo (69),
2. Zlatan Ibrahimovic (47),
3. Lionel Messi (45),
4. Luis Suárez (42)
5. Edinson Cavani (41)
6. Asamoah Gyan (40)
7. Robert Lewandowski (39),
8. Alvaro Negredo (38),
9. Jonathan Soriano (37),
10. Diego Costa (36),
Tags: