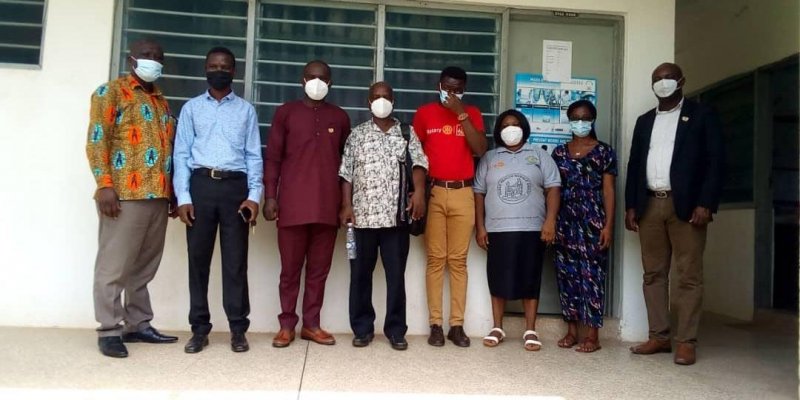 The structure of the Nzema-East Municipal offices of the Ghana Health Services, has become a death-trap and poses danger to staff of the Service.

The situation has compelled staff at the facility to be running a shift system as they are afraid of sitting in their offices to work.

This came to light when the Member of Parliament (MP) for Evalue-Adjomoro-Gwira, Kofi Arko-Nokoe paid a familiarization visit to the facility as part of his schedule to meet and interact with Heads of Departments (H.O.Ds) in the Nzema-East Municipal Assembly.

The visit afforded the MP to learn at first hand, teething problems militating against work of staff at the Ghana Health Services in Axim.

The Accounting Clerk at the GHS at the Nzema-East Municipal Assembly, Mr John Davies on behalf of the Municipal Director of Health, Madam Priscilla Amoah, told the MP that the building in which they worked had developed serious cracks and leaked during the rains.

He said the building was no longer conducive for work as there were fears that it might collapse at any given time.

Mr Davies described the visit of the MP as a good start and asked him to contribute his quota towards the development of the health sector as a significant indelible mark during his tenure.

Deputy Director of Nursing Services (DDNS) at the facility, Madam Margaret Essoun, said 13 active cases of the Covid-19 have been recorded in the Nzema-East Municipality as of the time the MP visited the area.

She said the service had taken delivery of more personal protective equipment (PPEs) from the government to promote the Covid-19 protocols though the supply of PPE was inadequate at the inception of the pandemic.

She said the Municipal Assembly pledged to work on the building by January 2021 but nothing had been done, but only asked staff at the Ghana Health Services office to move to the Assembly Hall, which she said was not the best.

Madam Esson said the office needed more laptops and another vehicle to enhance their operations.

On his part, Mr. Arko-Nokoe expressed wary at the dilapidated state of the structure being used as offices of the Ghana Health Services.

He expressed readiness to work hand in hand with the Service to find lasting solution to the problems confronting the health sector.

The MP said he was ready to build healthy relationships with Heads of Departments to promote health delivery in the Municipality.

Mr Arko-Nokoe was not happy that a health facility in the Gwira area had been abandoned to the detriment of the health status of the people.

DISCLAIMER: The Views, Comments, Opinions, Contributions and Statements made by Readers and Contributors on this platform do not necessarily represent the views or policy of Multimedia Group Limited.
Tags:
Axim
Death-trap
Ghana Health Service