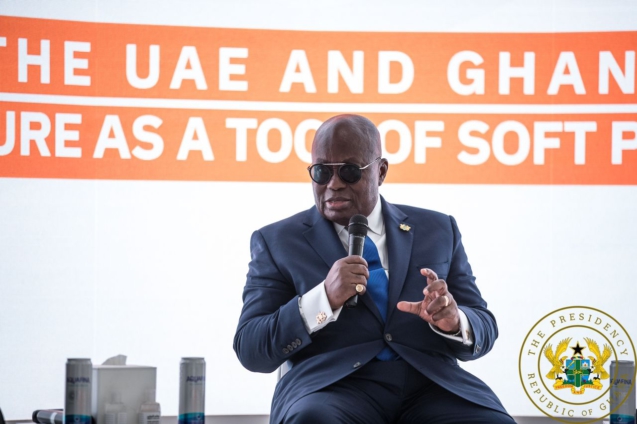 Ghana is in talks with Emirates National Oil Co. for a barter arrangement that will enable the West African nation to buy fuel with gold.

Ghana, Africa’s second-largest gold producer, last week ordered large mining companies to sell 20% of the metal they refine to the central bank from January 1 as it builds up reserves of bullion to be used to import fuel and reduce demand for dollars after its currency plunged 57% this year.

“We’re open to any international oil-trading company that is interested,” Mahama said in a phone interview on Friday.

“Starting next October, all our oil-product needs would be swapped for gold.”

Ghana is struggling to stabilize its economy and sees the barter system as a way to stem a slide in the cedi — the world’s worst performer among currencies tracked by Bloomberg.

The weakening cedi is fueling inflation and depleting the nation’s foreign-exchange reserves.

Meanwhile, President Nana Akufo-Addo’s government, which lost access to international capital markets this year because of ballooning debt and loan-service costs, plans to ask international bondholders to accept losses on their investments to pave the way for an International Monetary Fund bailout.

Dubai has a long association with the gold trade. While critics say that regulatory loopholes allow bullion used for money laundering and smuggled out of war zones to be traded in the city, Dubai’s commodities exchange has rejected those claims.

“ENOC is interested in giving us refined oil for gold,” Steve Opata, head of financial markets at the Bank of Ghana, said in an interview on Monday.

“Depending on what quantities they are committed to giving us, we will give them the equivalent in gold. This is a government-to-government program.”

Ghana spends about $10 billion annually on imports, of which 48% is spent on purchasing fuel.

The government expects bartering gold for refined crude will help it rebuild gross international reserves that fell to $6.7 billion at the end of October, enough to cover just 2.9 months of imports, from $10.8 billion a year earlier.

The plunging currency resulted in inflation accelerating to 40.4% in October. That prompted the central bank to raise borrowing costs by 250 basis points to 27%, the highest level in more than 19 years.

The Bank of Ghana will buy the gold from mining companies in cedis. Ghana began buying gold last year — the first time in 60 years — to bolster its foreign reserves. The latest move ramps up the purchases.

“If we implement it as envisioned, it will fundamentally change our balance of payments,” Bawumia said in a Facebook post.

Oil importers’ demand for dollars “in the face of dwindling foreign-exchange reserves results in the depreciation of the cedi and increases in the cost of living with higher prices for fuel, transportation and utilities,” he said.

DISCLAIMER: The Views, Comments, Opinions, Contributions and Statements made by Readers and Contributors on this platform do not necessarily represent the views or policy of Multimedia Group Limited.
Tags:
Dubai
Emirates National Oil Co
gold for oil