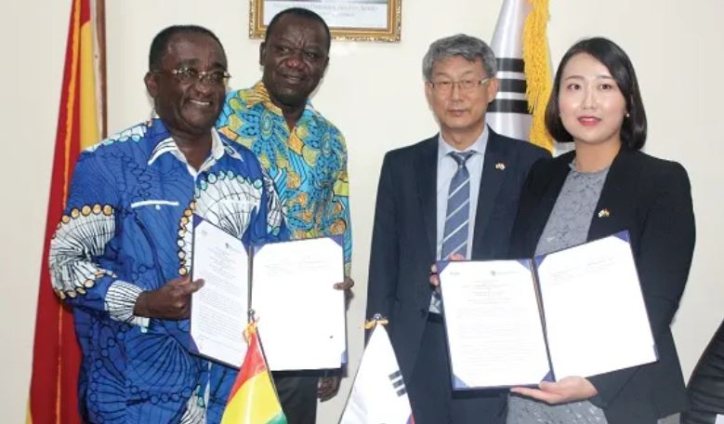 The Ministry of Food and Agriculture (MoFA), in collaboration with the Korea International Cooperation Agency (KOICA) and the Assin North District Assembly, has introduced some agricultural equipment to boost rice production in the area.

The move formed part of an $8 million agreement signed between South Korea and Ghana towards improving capacity and rice seed development, provision of agricultural machinery and equipment, and the construction of a rice milling plant and agricultural equipment storage facility.

In addition, a total of 8 metric tonnes of certified seeds are expected to be distributed, with each beneficiary farmer getting 15.5 kilogrammes of seeds at no cost for cultivation.

Okyereko in the Gomoa East District has been designed for rice seed production whereas the remaining four districts produce paddy rice.

The project is funded by KOICA and implemented in partnership with the MoFA through the District Assemblies.

Presenting the equipment, Mr Charles Ohene Andoh, the District Chief Executive explained that the project seeks to improve the rice value chain in the area following bilateral cooperation between the Government of the Republic of Korea and the Government of Ghana.

He said the provision of the agricultural equipment, which was the key component of the rice value chain project, was important to promote the government’s agric mechanisation drive.

The machines would serve as valuable assets to beneficiary farmers in boosting rice production with the potential to positively impact the lives and livelihood of the farmers at the microeconomic level.

That, the DCE said, would have a multiplying effect and a positive impact on the economy, considering the value of enhanced rice production and productivity.

With that, he encouraged farmers to scale up production to maintain national food security.

Mr Joseph Kwabena Haizel, the District Director of Agriculture, said MoFA and KOICA were fully committed to the successful implementation of all components under the project.

He said the district could produce rice to feed the country and called on the people, especially the youth, to venture into rice farming as a viable venture to ease unemployment and better themselves.

DISCLAIMER: The Views, Comments, Opinions, Contributions and Statements made by Readers and Contributors on this platform do not necessarily represent the views or policy of Multimedia Group Limited.
Tags:
Assin North District Assembly
Korea
Korea International Cooperation Agency